A tiny film set in the slums of India capped an unlikely journey to the top on Sunday, going from stealing hearts around the world to becoming the unlikely winner of Best Picture at the 81st Academy Awards.

Talk about a Hollywood ending. Rejected by one Hollywood studio, starring entirely unknown actors and with much of the film not in English, "Slumdog Millionaire" had to be one of the unlikeliest candidates ever to win the top Oscar.

"When we started we had no stars, no power or muscle," said the producer Christian Colson, as he accepted his Oscar surrounded by his cast, including the tiny Azharuddin Mohammed Ismail, age 10, who was flown over by Fox Searchlight for the occasion.

Colson added: "We didn’t have enough money to do what we wanted to do. But we had a script that inspired mad love in everyone who read it."

"Slumdog Millionaire," directed by Danny Boyle – who won the Oscar for Best Director —  is the story of a ghetto-bred boy in India who relives the traumas of his young life while answering questions on the Mumbai version of the television contest "Who Wants to Be a Millionaire?"

It is also a love story about two pint-sized, slum-dwelling children who lose one another and, after life-threatening adventures, find their way back together by the end of the movie.

Rags-to-riches stories are the touchstone of Hollywood fantasy. But as a small, foreign film with no known actors and a miniscule $15 million budget, "Slumdog" initially didn’t seem to have much of a chance of finding a toehold in the Academy of Motion Picture Arts and Sciences, much less grabbing 10 nominations and eight statues on Oscar night on Sunday. 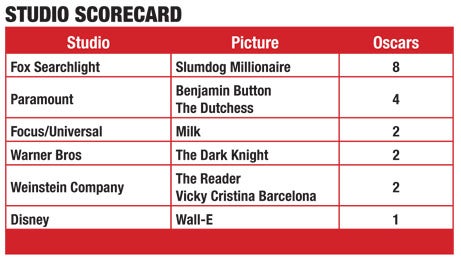 It won no acting awards. Those went to Sean Penn for his portrayal of gay politician Harvey Milk, and Kate Winslet, who won for her portrayal of a German woman with a secret in "The Reader." (See full list.)

Meanwhile, "Slumdog’s main competition, "The Curious Case of Benjamin Button," won only three Oscars despite 13 nominations. "Button" was an old-style blockbuster epic, with movie stars Brad Pitt and Cate Blanchett, made by Paramount.

For years the Oscars have been dominated by small films released by specialty divisions of studios, or by independent studios. This year was no exception, as the only blockbuster film among the nominees was rejected in every major category.

Indeed, little Fox Searchlight won the lion’s share of the Oscars, eight, far more than any of the major studios.

But things didn’t start that auspiciously for "Slumdog."

The film was initially bought for U.S. distribution by Warner Independent, the specialty arm of Warner Brothers. But the niche studio was dissolved in May 2008, and — in a moment that is worthy of Hollywood legend — big Warner stepped in to see what was left on the slate and rejected the film.

The head of production at Warner Bros, Jeff Robinov, saw "Slumdog" when it was finished and pronounced it worthy of direct-to-video distribution, according to one knowledgeable executive.

Instead, Fox Searchlight stepped in to co-distribute the film. "Slumdog" had no soundtrack release until late December because of the last-minute change.

The niche arm of Twentieth Century Fox, led by Peter Rice, has had extraordinary success in choosing small, charming films that have found broad appeal, including at the Oscars, including "Little Miss Sunshine," "Napoleon Dynamite" and "Sideways."

The film continued to win accolades at festivals like Telluride and Toronto, and began scooping up awards all through the season. The film won the top prize at BAFTA, the Directors Guild of America award for Danny Boyle, best ensemble prize at the Screen Actors Guild, Best Adapted Screenplay for Simon Beaufoy at the Writers Guild of America, best picture at the Producers Guild and Best Drama at the Golden Globes.

For the Oscars, it seemed all over but the shouting as the evening began. "Slumdog" was picked by practically every critic and Oscar-picker – from Tom O’Neil at Gold Derby to Gene Seymour at Newsday to David Carr at the New York Times – as the likely winner of the Oscar.

What was left? The box office. The film which started in the low double-digits at the box office now stands poised to break the $100 million mark. (see chart below) At the end of a busy ticket-buying weekend, the film had grossed $98 million domestically by Sunday for Fox Searchlight, and about $150 million worldwide.

Despite the lack of drama at the start of the awards show, there was plenty of anxiety around the telecast, with the Academy determined to improve on last year’s historic low in ratings, when only 32 million viewers tuned in.

Some moments worked – as when great Oscar-winning actresses of past year offered words of praise to this year’s nominees, including Shirley Maclaine’s message to nominee Anne Hathaway, and Sophia Lauren speaking to Meryl Streep from the stage.

But much of the so-called innovation fell flat, and the show was every bit as long as usual, nearly three and a half hours.

The rise of the Internet has meant a time of declining ratings for most awards shows. The Emmys have suffered, and just a month ago the Golden Globes had dismal ratings, averaging 14 million viewers, down 26% from 2007.

The most innovative part of the evening was a Judd Apatow short, with James Franco and Seth Rogen, in their "Pineapple Express" stoner mode, slouching on their couch with Oscar-winning cinematographer Janusz Kaminiski.