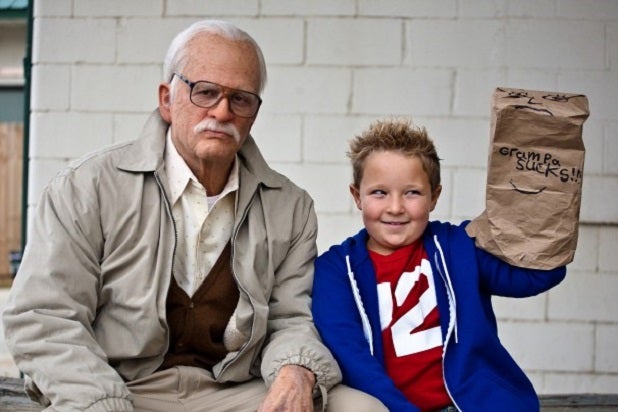 “The country was ready for a movie about our national pastimes: pranks, bad behavior and prosthetic body parts,” he told TheWrap.

Also helping: With all the pedigreed, awards-bait movies marching into theaters, there hadn’t been a broad comedy out in months.

“I think moviegoers were a little fatigued. There was too much weighty Oscar stuff with gravitas out there,” Toffler said, and audiences seemed to agree. Despite the presence of “Gravity,” “Captain Phillips” and “12 Years of Slave,” Johnny Knoxville‘s portrayal of sleazy geezer Irving Ziskin was a runaway winner.

Toffer had a big part in launching the MTV show “Jackass” back in 2000 and was instrumental in bringing it to the big screen via Paramount, a corporate sibling of the network at Viacom, in 2002. He was an executive producer on the three earlier “Jackass” movies, all made for $20 million or less, and they have brought in more than $350 million at the box office.

He said both he and Knoxville were wary going into the weekend, because “Bad Grandpa” was a spinoff and lighter on mayhem than the earlier films.

“There was a narrative, and even a relationship with his grandson (played by Jackson Nicoll), and that’s all good, but we didn’t want that to get in the way of the pranks,” Toffler said.

The kinder, gentler but still R-rated formula, orchestrated by director Jeff Tremaine with a script assist from Spike Jonze, worked just fine. And it b

Sixty-three percent of the audience for “Bad Grandpa” was over 25; by contrast, 2010’s “Jackass 3D” drew a crowd that was 67 percent under 25. It played better with women too, with a 44 percent female audience, compared to the previous film’s 39 percent women.

“Some of that is because we’ve been doing this for more than a decade now, and people are sticking with us as they get older,” said Toffler (on left with Knoxville in photo above).

It even played well overseas, taking in $8 million including $3.2 million from the U.K. and $3.1 million from Germany, where it opened at No. 1.

So with all that, is another “Jackass” movie a given?

“My brethren at Paramount have already asked,” Toffler said. “There certainly seems to be a demand, but we’ll see if the gang has another one left in them.”

“Bad Grandpa,” may be lighter on pranks than the other “Jackass” movies, but Knoxville still fractured his elbow, had to undergo surgery for a ruptured tendon in his knee, and ruptured another tendon in his hand while shooting a promotion for the film at a college frat house.

“Bad Grandpa” looks like it will land between $75 million and $100 million domestically, and that’s quite a return on a $15 million movie.

“That’s a conversation for dinner, drinks and a late night,” said Toffler.