Plenty of shows have “jumped the shark” over the years, so for Discovery’s annual Shark Week, the pranksters of “Jackass” decided to do so as well — just literally. And the stunt ended about as well as you’d think.

Naturally, the crew worked their way up to the stunt. To start, Sean McInerney — known as Poopies on the show — wakeboarded across shark-infested waters, making it through unscathed. (Even after his body was doused in chum at the beginning of the show). So, to up the Jackassery, the guys decided to have Poopies attempt to jump the waters on his board.

Of course, he only made it a few feet off the ramp before landing in the water, which you can see on repeat in the gif below. And upon landing, things took a turn. 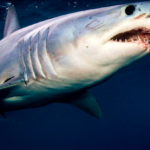 Splashing down in the water, Poopies is swarmed and bitten by one of the sharks on his arm and hand.

“Get him! Get him out!” someone is heard yelling off-camera.

“Tourniquet! Tourniquet!” another yells as medics attend to Poopies’ hand injury. Thankfully, the crew jumped into action and Poopies wasn’t seriously injured or maimed, though he did end up in a hand cast as a result.

A visibly shaken Chris Pontius added, “It’s a reminder that we are pushing it pretty hard.”

In a post-show interview, McInerney acknowledged that injury was a distinct possibility in the stunt, and that he understands why it happened. “I don’t blame the sharks at all. I mean, I was in their living room, and it was dinner time,” he said.

You can watch the full video here. 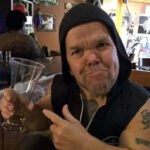 This isn’t the first time the men of “Jackass” have attempted shark-related stunts. In 2019, “Jackass” vet Steve-O used himself as live shark bait, literally shoving a fishing hook through his mouth so he could be reeled in. Aside from the hole created by the hook, he came out unharmed, after unintentionally kicking an approaching shark away.