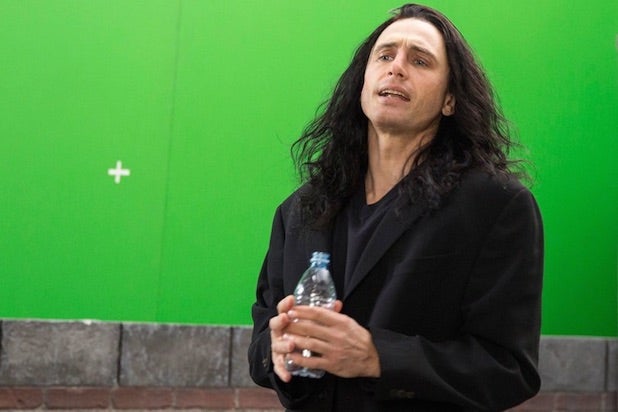 James Franco has been nominated for a Screen Actors Guild Award and a Film Independent Spirit Award for his performance as D-movie director Tommy Wiseau in “The Disaster Artist,” and he’s considered a strong candidate for an Oscar nomination as well.

Since Franco won the Golden Globe on Sunday for his performance, five women have come forward with accusations of sexual misconduct and inappropriate behavior, which he has denied. But the timing of the three awards shows matters in terms of the potential fallout. A rundown:

Screen Actors Guild Awards
On December 13, Franco was nominated for Outstanding Performance by a Male Actor in a Leading Role for “The Disaster Artist,” which he also directed. Final voting, which is open to more than 100,000 SAG-AFTRA members who are current on their dues, began on December 19 and runs through January 19, with the 24th SAG Awards taking place on January 21.

That means that more than three weeks of the four-and-a-half-week voting period had already taken place before the first accusations against Franco were made public, and that 24 days of the 31-day voting window had already elapsed before the five women spoke out in the Los Angeles Times.

The accusations may well hurt his chances with those who have yet to cast ballots, but a win at SAG was always a real long shot for Franco, who is up against Gary Oldman (“Darkest Hour”) and Timothée Chalamet (“Call Me by Your Name”) and doesn’t have the advantage of competing in a comedy-specific category as he did at the Golden Globes.

So while his chances of a win have gotten smaller, they weren’t very big to begin with.

Academy Awards
The Oscars’ outlook for Franco (and for the real-life Wiseau, who is no doubt aching to get a ticket to the Dolby Theatre) is trickier. The voting window for nominations only lasts a single week, from January 5 through January 12; according to one of the longtime balloting leaders at the Academy’s accounting firm, PwC, a large number of voters typically cast their ballots right away, and then votes trickle in until another large batch of last-minute ballots are cast.

The members of the Actors Branch who voted early would have done so without knowing about the accusations against Franco, which didn’t really gain traction until the morning after the Globes, January 8. And the most damning claims, the ones contained in the L.A. Times story, didn’t break until only two days were left in the eight-day voting period.

Because the Oscars’ preferential system of nominations voting rewards passionate support over consensus choices, Franco could already have picked up enough votes to obtain a nomination even if late voters shun him.

But with Oldman, Chalamet and Daniel Day-Lewis (“Phantom Thread”) the only sure things, Franco is in a tight race with the likes of Tom Hanks (“The Post”), Daniel Kaluuya (“Get Out”), Denzel Washington (“Roman J. Israel, Esq.”) and Jake Gyllenhaal (“Stronger”) for the last two slots, and an 11th-hour controversy could possibly tip the scales.

But the allegations are unlikely to have much impact in the Best Adapted Screenplay category, where “The Disaster Artist” writers Scott Neustadter and Michael H. Weber are considered strong candidates for a nomination.

Film Independent Spirit Awards
Franco would have been one of the favorites to win the Spirit Award for Best Male Lead, along with Chalamet and Kaluuya. (Harris Dickinson and Robert Pattinson are also nominated this year.) But in this case, it’s far too early to say what kind of impact the accusations might have, because voting doesn’t begin until February 3. (It then runs through Feb. 16.)

His fate at these awards, which are voted on by a mixture of industry figures and fans who pay yearly dues to join Film Independent, are entirely dependent on what happens with the Franco story over the next three and a half weeks.