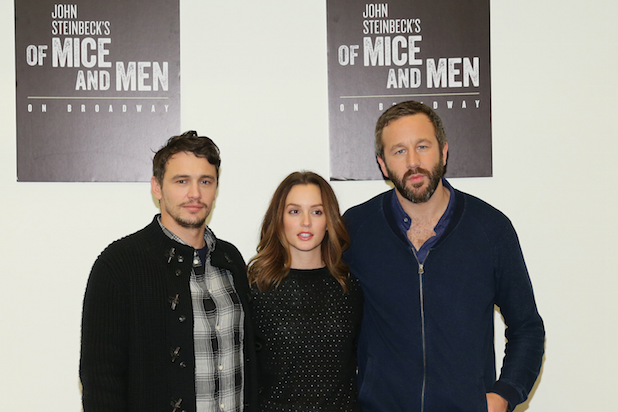 James Franco, Leighton Meester and Chris O’Dowd make their Broadway debuts next month in “Of Mice and Men,” and the three film and television actors are still adjusting to the amount of rehearsal time that goes into preparing for a play.

Film is spontaneous, they argued. The stage is an endurance act.

“When you make a film, essentially all you need is one good take for each set up… you just need to get it right once,” Franco said at a press conference Thursday for the production.

The theater is different he argued, because,”as actors, it’s not about just getting it right once. It’s about honing the performance and the character that we can then ride night after night.”

It also requires accepting that a performance is not locked in celluloid. It will morph over the course of a play’s run, Meester said.

“The meaning behind each line, it changes every day,” Meester said. “It will be so crazy going up in front of different people every night and feeling different energy from the audience, whether it’s good or bad.”

O’Dowd agreed with his co-stars, though he put the month of rehearsals the trio has endured in more colorful and carnal terms.

“It’s like opening night is the first time we all sleep together and this process is the courtship,” he said.

“Some of us have already been sleeping together,” director Anna D. Shapiro, who won a Tony for “August: Osage County,”  interjected.

“I meant collectively, as an art project that James is working on,’ O’Dowd said.

That’s a reference to Franco’s multi-hyphenate nature. When not pursuing an English PhD at Yale University, Franco somehow found time to be involved in nearly a dozen film projects last year. In addition to starring in “Spring Breakers” and “Oz the Great and Powerful,” he co-directed and produced “Interior. Leather Bar” and directed, adapted and produced “As I Lay Dying.” Despite scheduling headaches, Broadway beckoned.

“It was the play I was waiting for… it’s an awesome role with the best director and if you don’t do this then you’re never going to do it,” Franco said.

Franco carries the biggest name in the cast and his involvement will likely make “Of Mice and Men” a hot ticket when it opens at the Longacre Theatre on April 16, despite its downbeat subject manner. However, Meester and O’Dowd are known quantities, having appeared in “Gossip Girl” and “Bridesmaids” respectively.

“Of Mice and Men” is a dramatic change of pace from those signature roles. It follows two migrant workers who search for a paycheck in the throes of the Great Depression. One, George (played by Franco), looks after the other, Lennie (O’Dowd), a broad-shouldered mountain of a man who is intellectually limited. Their bond powers the story.

The intensity of their friendship may be eye-opening to male members of the audience, O’Dowd argued.

Also read: James Franco Leverages the Art and Marketing Power of the Selfie

“I’ve worked on construction sites and seen how badly people interact with each other and how impossible it is to be open, and I hope that people go away thinking how much better their lives are when they open up to each other,” he said.

The Great Depression may not feel as remote today as it did a decade ago. The recent economic crisis has splashed the issue of income inequality and poverty on the front pages again.

However, the story is not a polemic about unemployment. Shapiro noted that even when John Steinbeck wrote the novella and the play in 1937, the era of migrant workers had largely drawn to a close. Increased industrialization was making roving farmhands something of an endangered species.

“The timeliness politically of the play has to do with our country’s willful blindness to our eventual obsolescence and how what’s being visited on an individual in a country will eventually be visited on the entire joint,” she added.