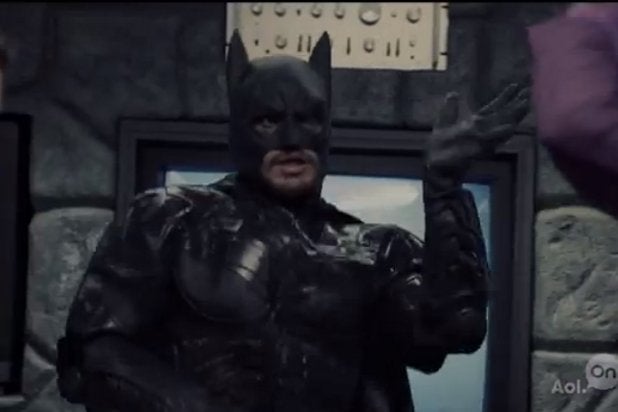 James Franco has proven he’s a man who can tackle anything in life, so why not two films at once? In his new AOL series “Making a Scene,” Franco and his friends mash up two popular film scenes to create new hybrids that are both magical and utterly ridiculous.

To ensure the randomness of it, they’ve created a rather gaudy wheel with different categories on it. Perhaps the most ridiculous mashup they’ve come up with so far is a combination of the “Banana Boat” musical number from “Beetlejuice” and Heath Ledger’s performance as the Joker in “The Dark Knight.”

Batman and the Joker were joined in the sketch by the 1960s TV series Robin, Tim Burton‘s Catwoman, along with “Beetlejuice’s” Lydia — though Franco’s Batman kept referring to her as Winona Ryder — and Beetlejuice himself.

There’s a lot of anger at the table, with most of it coming from Franco, who’s doing his best to imitate Christian Bale‘s gravelly growl. Even that gets made fun of by everyone else at the table, as well as the laughable idea that anyone out there doesn’t know that Batman is Bruce Wayne.

Just like in “Beetlejuice,” though, the proceedings are suddenly interrupted as they one by one begin lip-synching to the “Banana Boat” song.

Other movie mix-ups include a hybrid of “Dirty Dancing and “Reservoir Dogs,” which you can see below, while other videos have the group recreating classic movie scenes in unexpected genres, like a silent film “Taxi Driver,” or a rom-com “The Shining.”