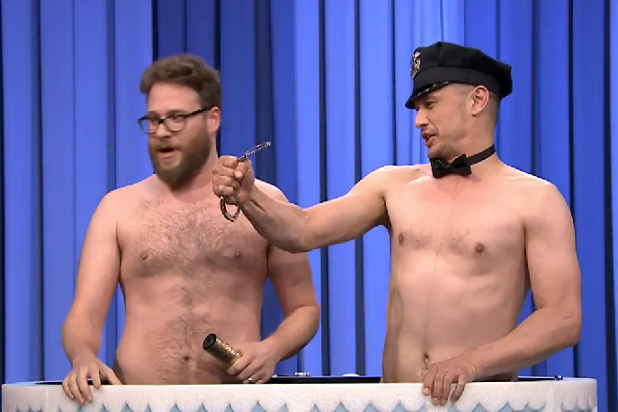 “Tonight Show” host Fallon got a fleshy, hairy surprise for his birthday on Friday night’s episode, after his crew arranged a secret gift for his 40th birthday.

“I thought I’d never like surprises, but I kinda like it,” Fallon admitted before the curtain pulled back to reveal his present. “This is good.”

He might have thought twice about that in the ensuing moments, as a giant cake was rolled out onto the stage and out popped…

Rogen wasn’t alone. His “This Is the End” costar James Franco popped out shortly thereafter, playing the role of stripper cop, complete with handcuffs.

Luckily, the birthday celebration grew less unseemly from there, as Stevie Wonder emerged from backstage to serenade Fallon.

Oh, and there was a dancing panda involved too.