A publicist and friend of Rado’s confirmed to the Associated Press he died of cardio respiratory arrest on Tuesday in New York City.

“Hair,” with music by Galt MacDermot, broke taboos and boundaries. It was arguably the first rock ‘n’ roll musical to appear on Broadway (in 1968, a year after its off-Broadway debut), paving the way for things like “Jesus Christ Superstar,” “Rent” and countless jukebox musicals (if you hate “Rock of Ages,” you can blame “Hair”).

The show’s inventive staging, which encouraged the audience to participate in the “Be-In” finale and the show’s frank depiction of sex (including full-frontal nudity and same-sex kissing) and drug consumption were seen as genuinely taboo-shattering. On Broadway, “Hair” ran for 1,800 performances and Rado served as a principle cast member. “Hair” also spawned several radio hits, including “Age of Aquarius,” “Good Morning Starshine” and “Easy to Be Hard.” 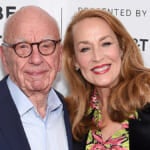 While “Hair” lost the Tony, it won a Grammy and in 2019, the Broadway cast recording was inducted into the National Recording Registry of the Library of Congress.

A movie version of the play, directed by Miloš Forman, was released in 1979 and was nominated for several awards, including a Cesar and two Golden Globes. The film version of “Hair” was included on The New York Times list of the Best 1000 Movies Ever.

Rado and Ragni initially went their separate ways (Ragni ccollaborated with MacDermot on 1972’s Broadway production “Dude”) and Rado worked on the Off-Broadway production of “The Rainbow Rainbeam Radio Roadshow” (also in 1972), seen by many (particularly in restagings) as a sequel of sorts to “Hair.”

By 1974, Rado and Ragni had reunited. At the time of Ragni’s untimely death from cancer in 1991, they had been collaborating on a sequel to “Hair.” Since Ragni’s death, Rado had been largely overseeing the “Hair” operation, including a touring version in 1994 which he also directed.