Jamie Lee Curtis on Friday celebrated the 28th anniversary of James Cameron’s “True Lies” by sharing a photo of herself actually dangling out of a helicopter in order to achieve one of the action movie’s more daring stunts.

Curtis explained in a Facebook post that while her stunt double Donna Keegan deserves all the credit for the scene in which Curtis’ character Helen is pulled by Arnold Schwarzenegger out of a limousine moon roof and over burning wreckage, Curtis herself did soar in the air so they could achieve one magnificent overhead shot. You can see her photo below and the finished product here.

“In order to get the shot we had to wire me to the helicopter at base camp and then fly for 20 minutes over the water to get to the 7 mile bridge where the wreckage took place,” Curtis said, saying that the picture took place just three days before her 35th birthday. “In the photograph is Joel Kramer, who doubled Arnold on the skid, and that’s James Cameron hanging out of the passenger seat with the camera.” 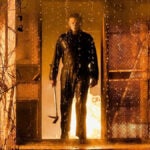 Curtis explained that “obviously” much of the sequence was achieved with her on the road, as was her stunt double, but that the shot was “one of the most spectacular ever done.” She did though have one must before agreeing to go up in the air.

“Chuck Tamburo was the pilot, and the only requirement I had for the sequence was that somebody have wire cutters in the helicopter in case they had to ditch over water so that I could be separated from it,” Curtis said. “I saw manatees and it was late afternoon and it was a glorious ride on a wire all thanks to James Cameron and Arnold Schwarzenegger.”

Curtis’ stuntwoman Keegan actually addressed the scene in a 2020 documentary film and mentions how she was surprised to learn that IMDB’s trivia page once said that Curtis performed the stunt all on her own, without mention of Keegan’s own involvement.

“True Lies” from 1994 is an action comedy starring Schwarzenegger and Curtis that made over $378 million at the global box office. 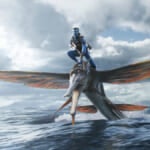