Jane Campion is apologizing to Venus and Serena Williams for saying in her Critics Choice Awards acceptance speech that they do not have to compete against men as she does, saying that her remarks were “thoughtless.”

Campion said on Sunday night while accepting her Best Director prize, “I give my love out to my fellow — the guys. The nominees” and added, “you know, Serena and Venus, you are such marvels. However, you do not play against the guys like I have to.”

“I made a thoughtless comment equating what I do in the film world with all that Serena Williams and Venus Williams have achieved,” “The Power of the Dog” director said in a new statement on Monday. “I did not intend to devalue these two legendary Black women and world-class athletes.” 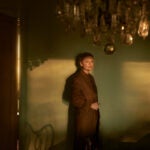 She continued: “The fact is the Williams sisters have, actually, squared off against men on the court (and off), and they have both raised the bar and opened doors for what is possible for women in this world. The last thing I would ever want to do is minimize remarkable women. I love Serena and Venus. Their accomplishments are titanic and inspiring. Serena and Venus, I apologize and completely celebrate you.”

Campion was criticized online for her remark about the tennis greats, saying it diminished their accomplishments as Black, female athletes. And Venus Williams herself looked visibly surprised during the Critics Choice Awards broadcast when she made the comment. The director however was seen posing with Venus at a Netflix after-party following the awards ceremony Sunday.

Campion had previously earned some goodwill when she had responded to some equally criticized comments by actor Sam Elliott about her film “The Power of the Dog,” calling him a “B-I-T-C-H” after he questioned “what the f— this woman from down there know about the American West” and questioned the film’s allusions to homosexuality.

For the record: A previous version of this story indicated that Jane Campion made the remarks at the BAFTA Awards, rather than the Critics Choice Awards. 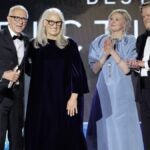