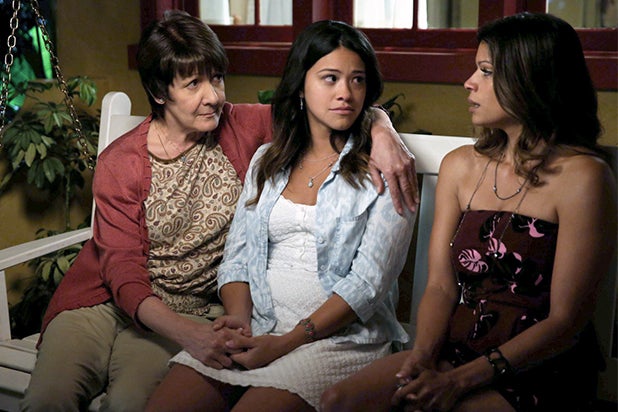 The premiere episode of the CW’s “Jane The Virgin” was filled with wild plot turns, but rising Latina star Gina Rodriguez told TheWrap viewers haven’t seen anything yet.

Her new show is an adaptation of a Venezuelan telenovela about an abstinent young woman who winds up getting accidentally inseminated during a routine visit to the gynecologist’s office and the young actress promised there are plenty more surprises in store.

In  review of the debut episode, Mekeisha Madden Toby called Rodriguez “believable and likable” in her performance and said “Jane the Virgin” was “arguably one of the best new offerings this season.”

But what will Season 1 of “Jane the Virgin” bring?

When TheWrap spoke with Rodriguez, she offered up five exciting possibilities:

1. If you think you know whether Jane will end up with Michael or Rafael, think again.

Jane starts off the episode in a sweet and loving relationship with a police officer named Michael (Brett Dier), but before long she finds herself accidentally inseminated by the equally charming (and way more rich) Raphael (Justin Baldoni). It’s clear Jane will eventually have to choose between her two suitors, but if you think you know who she’s choosing, think again.

As it turns out, even Rodriguez doesn’t know whether Jane is destined to wind up with her boyfriend or her sperm donor.

“Every time I read the next week’s script I find myself changing my mind on who Jane should wind up with,” she explained.

2. Even pretending to be pregnant is hard work.

Rodriguez’s television pregnancy might spare her any pickle cravings or bouts of morning sickness, but that doesn’t mean it’s easy. Jane confirmed her baby bump begins to show in the first few episodes of the series and by the time we get to mid-season she’ll basically be as big as a house.

In the episodes she’s currently shooting, the actress said she’s forced to wear a heavy prosthetic belly. It’s as physically tolling as one might imagine, but there is a silver lining to being strapped to such an awkward prop.

“It makes it easier for me to get into character,” she said.

3. A spoonful of humor will help the medicine go down.

One of the most interesting things about “Jane The Virgin” is how the show addresses serious and nuanced issues with more than a dash of humor. Rodriguez told TheWrap she thinks her show’s comedic undertones actually make it easier to have a dialogue about serious topics like accidental pregnancy, absentee parents, abstinence and even the difficult decision of whether or not to bring a baby to term.

4. Not everyone has daddy issues.

In one of the final scenes of Monday night’s episode of “Jane The Virgin,” we learn Jane’s biological father is actually charming telenovela star Rogelio (Jaime Camil).

Many shows might drag that mystery out all season, but Gina told TheWrap that Jane’s estranged relationship with her father will actually begin to resolve itself rather early on in the season. Of course, the road will still be filled with bumps.

5. You haven’t seen anything yet.

“Jane The Virgin’s” premiere episode has more plot twists than an  marathon, but Rodriguez insists the writers and showrunner Jennie Snyder Urman have more in store than anyone could possibly imagine. She said the actors typically don’t see each new script until they’re doing the table read for the coming episode, and the actress told us each new week’s twists and turns inevitably result in their collective jaws dropping to the ground.

TheWrap asked Rodriguez whether she was worried the show would take off and fans would start calling her by the name “Jane” the street.

“I hope they do,” she responded. “That would mean people are watching and the show is a success.”