Broadly speaking, the new Discovery+ documentary “January 6th” is well-timed, premiering just prior to the anniversary of the 2021 riots at the Capitol over the certification of Joe Biden’s election win — and as a new Congress is about to begin a lawmaking session. But upon closer inspection, “January 6th” falls into a more nebulous zone: It arrives a vaguely awkward two years after the incident, which makes it less immediate than the heavily covered first anniversary, while also significantly short of a major milestone.

It’s probably unfair to fault the 150-minute film for marking a two-year anniversary. But the timeline also makes it difficult to figure out the ideal audience for this project. For anyone who saw the frightening violence unfold on the news that day, this material, which intentionally stays within the pivotal 24 hours of 1/6/21, amounts to a comprehensive but familiar review. For anyone somehow oblivious to these events, it could theoretically prove eye-opening — but is a Discovery+ doc really going to break through to anyone who looked at a violent insurrection and saw patriotism?

Directors Gédéon and Jules Naudet have experience processing history as it happens; they were in Manhattan for the 9/11 terrorist attack of the World Trade Center, capturing the clearest footage of Flight 11 striking the North Tower. Their subsequent documentary, “9/11,” aired on CBS just six months later. Their new film has had more time to develop, and they utilize a clean, clear structure: “January 6th” alternates between accounts of the events going on inside the Capitol building, where the U.S. Congress met to certify the Electoral College’s results (typically more formality than lightning rod), told largely by senators, representatives, and their staff; and what was happening outside the building as a large group of Trump rally attendees coalesced into an angry mob, recounted by various law-enforcement officers and journalists on the scene. The two threads are linked by computerized maps of the area showing what was happening where — and become fully entwined when the rioters breach the Capitol building itself. A great deal of on-the-ground footage (as well as the usual news clips) augments the talking-head material. 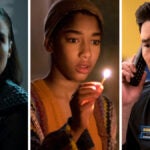 Also Read:
Here Are All the Major Netflix Shows Canceled in 2022

That footage is, as ever, shocking in the ferocity of its inarticulate rage and the single-mindedness of its mission statement: Donald Trump was supposed to stay president, and anyone keeping that from happening is the enemy. By this point, however, these images and chants are pretty familiar, and the sheer volume of it eventually becomes numbing. More novel is the sheer number of people the Naudets have collected for interviews, including Capitol and city police officers who detail their strategic (and, for much of the day, overwhelmed) attempts to contain the chaos. Some of this is repetitive, but it’s valuable to hear from officers of color about their experiences navigating this minefield while trying to stay in the moment and do their jobs.

The Naudets seem to be attempting something similar, which would explain why they never draw any contrasts between the reluctance to escalate force against these mostly white and actively violent protestors, as opposed to other groups who have been met with more brutality over more peaceful actions. Maybe they feel confident that these conflicts will emerge naturally; one the most memorable stories in the film is a Black cop recalling his rebuke of a protestor who insisted this violence was in service of people like him.

Moments like this are surrounded by accounts that become strikingly similar: Police attempting to hold the line, the mob pushing further (and angry that the cops they claimed to support aren’t actively helping them), and panic in the halls of Congress as staffers feared for their lives. Ultimately, Gédéon and Naudet are most adept at capturing the relentlessness of the event, and how it ran both lawmakers and law-enforcement into ragged exhaustion. Before that vividness sets in during its final stretch, “January 6th” feels like it’s either sacrificed some immediacy for comprehensiveness, or sacrificed a broader view of this day’s meaning in favor of relative currency. As a document, it’s valuable; as a documentary, it’s less essential.