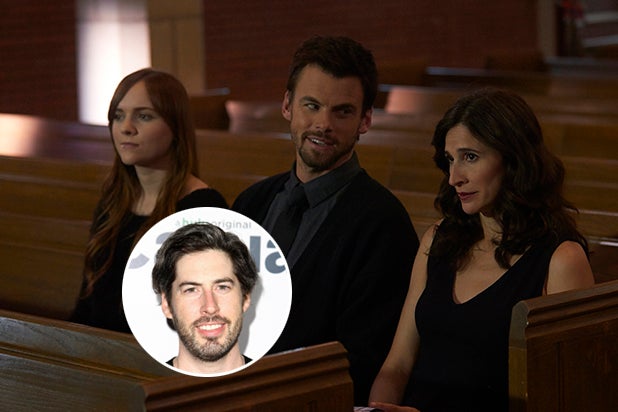 “When I write a film, all I think about is where the thing ends and how to get the audience there,” the “Up in the Air” director said in an interview with TheWrap. “And in television, it can’t end. You need the audience to return the next week.”

So when creating his first show, the director was looking for a series that could last. And that was what he found in the pilot script from series creator Zander Lehmann. “We were just looking for a voice. And that’s what kind of jumped off the page more than anything,” he said. “When you read a pilot … you’re just getting a taste, so you need to know that his voice is going to translate over the course of years.”

Reitman and Lehmann spoke with TheWrap, in which the executive producers talked about creating the show, their home at Hulu and the difference between doing television and movies:

TheWrap: How did you guys come together to work on “Casual”?
Lehmann: I had written the script when I was living with my sister. I lived with her for three years and wrote this, initially as a comedy sample. I had never written a half hour comedy before. I thought it would be a fun arena to tackle. And then my agent said, “This would be a great thing for Jason, he’s looking to get in to television.” And Jason was in the middle of “Men, Women and Children” at the time, so I sort of waited patiently because he was always the dream director for it … I think a lot of people wanted to make the Jason Reitman TV show, and I happened to be at the right place at the right time. And we were fortunate that Hulu decided to make it and give us ten episodes.

Reitman: All I could add is that I had been looking for an opportunity to make something in television for a while. [executive producer] Helen Estabrook and I had seen everything across the board, and we were just looking for a voice. And that’s what kind of jumped off the page more than anything. I guess that’s probably even more important in television than anything. When you read a pilot, you aren’t reading a whole season or five seasons. You’re just getting a taste, so you need to know that his voice is going to translate over the course of years.

What was your inspiration for the story?
Lehmann: I was living with my sister, and she started dating my best friend before they got married and moved in together. I thought there was some nice, inherent comedy in that. And the fact that we remained close and friends, I thought that was a nice dynamic. We’ve had a good sort of open relationship where we could talk about everything. And I always thought that was sweet, and that was an arena we hadn’t really seen on television. A brother and sister story done in this way.

How did you cast the show?
Reitman: I’ve been working with a guy named John Papsidera on my last two projects, and he’s an exceptional casting director. He was putting people in front of us, and I think in many cases, was trying things that we would’ve never thought of. I think the perfect example is in the casting of Leon. He’s not written as a British character, but he brought in Nyasha [Hatendi] and the second he finished his audition, Zander, Helen and I looked at each other and said, “Yeah, that’s it.”

What were you looking for?
Lehmann: It’s a combo. First, we’re looking for people who understand the dialog and can kind of sing in key … Michaela and Tommy are great dramatic actors who happen to be incredibly funny with great comedic timing. And finally we need people with chemistry. This show, is almost like a love story between a brother and a sister, and their bond needed two people with chemistry. And that was clear from the moment they got in the room together.

What’s the difference between doing TV and film, in your experience?
Reitman: The first thing I say when people ask what’s the difference, is that film has an ending and TV doesn’t. When I write a film, all I think about is where the thing ends and how to get the audience there. And in television, it can’t end. You need the audience to return the next week. It kind of shifts the drive of the story. But I find that more as a writer than as a director.

How did the show end up at Hulu?
Reitman: We went out with the show and it was this combination of the people who seemed to understand the show the most, and who seemed the most interested in getting out there. It was the perfect match. I can’t help but feel like we went to them … We both felt fortunate in what Hulu was looking for, not only as a broadcaster, but a producer of television. We reached them at the right moment, when they were getting ready to make more.

Do you feel like you know what their goals are for original programming?
Lehmann: I think honestly, they’re just looking for things that they think are good. And so far, they’ve been successful … I think they went into it thinking, “If it’s a good show, it doesn’t matter if it’s our brand. We’re going to make it our brand. And if you stand behind it, it will find an audience.” I don’t have much of a track record, they took a huge chance making my show. And Helen and Jason have never done TV. But they liked the material enough and they liked what we were doing that they took a chance.

How much creative freedom do you have?
Reitman: I’ve never made any television, so I can’t compare it to other companies, but what I can compare it to is working with a company like Fox Searchlight making independent film. And that’s what it felt like. At the end of the day, there was never this push for stunt casting, the conversation was always about what’s going to make the best show.

Lehmann: It’s not that they didn’t give any notes. I think people sometimes say Amazon and Netflix never give any notes and just let the creators do their thing. Hulu gave us notes, they just happened to be really good. They were sparing in what they gave us, but the notes that they really focused on and wanted us to take, we generally understood where they were coming from. They never forced anything on us … I thought it was a great relationship all around.