Jeff Bridges’ work as a fading country singer in director Scott Cooper’s “Crazy Heart” has thrust one of Hollywood’s most respected actors squarely into the Oscar race. As Bad Blake, an alcoholic one-time star reduced to playing in bowling alleys with pickup bands, Bridges gets one of the meatiest roles of his career, and responds with a performance that feels absolutely real, with the help of top-notch songs and expert advice from a team of singers and songwriters assembled by producer and musician T Bone Burnett. On Tuesday morning, he received a best-actor nomination for the Golden Globes.
As laid-back and easygoing in life as you’d expect from his iconic characters like the Dude (from “The Big Lebowski”), Bridges talked to TheWrap about the pitfalls of music movies. 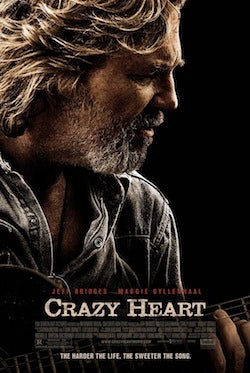 You and your old friend T Bone Burnett came on board “Crazy Heart” at about the same time. Would you have done the movie without him?
I don’t think so. The music-movie bar was set pretty high with me with “The Fabulous Baker Boys.” We had a great time doing that, and it came out pretty well, I thought. But we already had the music, the standards.
The music in this movie was just as important as the music in that movie – but the difference was that in this movie, there was no existing music. And so when it first came across my desk I said, “Good idea, but pass.” But when T Bone got involved, it made it viable.
But even with T Bone, you didn’t have any songs to start with.
Well, you look at the pudding that comes out of Bone’s oven, man, and there’s not a bad batch. It was kind of a leap of faith that we would have the tunes, but the cool thing is that the tunes came organically. They came from the script, from the story, from the characters.
Were you cautious about working with a first-time director?
No. I’ve had wonderful experiences with first-time directors. And we haven’t done much better than “Citizen Kane,” you know, which was a first-timer. And when I met Scott, I got a really good hit off this guy. He was very enthusiastic, and I saw that he was really steeped in the material.
He was raised in Virginia, really familiar with country music and bluegrass, and he was a good buddy with Merle Haggard and Billy Joe Shaver. That was important to me.
Were you confident in your ability to deliver the songs?
I don’t know about confident, but it was a thrilling prospect to be up there doing it. I put out an album myself a couple of years ago called “Be Here Soon,” so I got a taste of it that way. But there was a certain amount of anxiety about whether I could pull it off – especially something I cared so much about.
The film is filled with wonderful little details, like the Sparkletts bottle that Bad Blake empties when he gets out of his car …
That’s [the late singer-songwriter Stephen] Bruton. The details are so important in a character study like this, and Bruton was my touchstone for all of that stuff. Like that Sparkletts bottle. He said, “You know, when I’m driving hundreds of miles to the next gig, I don’t want to stop to piss. I just have a bottle, and I’ll piss in the bottle.” I said, “Oh, that’s going in the movie, man!”
The book also takes you to a much darker place at the end.
Yeah. We shot that scene, where he’s lying on his back in the mud, looking up, and he says, “Otis, goddamn,” or something like that. We shot it, and god, it was f—ing cold.  Oh, man, it was cold.  We were doing that scene in the rain, with a big boom shot, and Scott was yelling, “One more time!”  God.
And then the scene was cut — all your suffering was for nothing?
Yeah, well, that’s the name of the game, I guess. And rhythmically, a book is a very different thing from a movie.
Playing a country singer in a low-key movie like this, it seems as if you’re working in the shadows of performances like Robert Duvall in “Tender Mercies,” or Rip Torn in “Payday.”
Yeah. I admire both of those movies and both of those performances, but I didn’t think about them. You know, living in the shadows. … Being from the family that I was born into, you could say I lived under the shadow of my dad, my brother. You can always find those shadows, but I don’t ponder on those things too much. It doesn’t seem to help.
I know you’ve said that “Once” is one of your favorite movies of recent years.
Oh, yeah!
It strikes me that you could compare music and movies, and say that films like “Crazy Heart” and “Once” are like the understated, rough music that Bad Blake makes, while the bigger, slicker movies that the major studios release are like the music of [Colin Farrell’s mainstream Nashville character] Tommy Sweet.
Yeah.  But I like movies in general. I guess the movies I’m most attracted to are movies that surprise you. I got to be in “Iron Man,” and I love the way that came out. That was due largely to Robert Downey and Jon Favreau, who was a wonderful leader and a great improviser. That really served us well, because we didn’t have much of a script going into that one, and Robert is so facile with words that he was exactly what the movie needed. It was a refreshing take on that big tentpole, superhero thing.
After John C. Reilly played a singer in the comedy “Walk Hard,” he did a short promotional tour in character. Will we see a Bad Blake tour to promote “Crazy Heart?”
I’ll probably play a couple of things to promote the movie. But I’ve got a pile of songs, and I’d like to put out another album of my own stuff and some tunes that I like. I don’t know if it’d be solid country, but maybe some. This has whetted my appetite.
x
Looks like you're enjoying reading