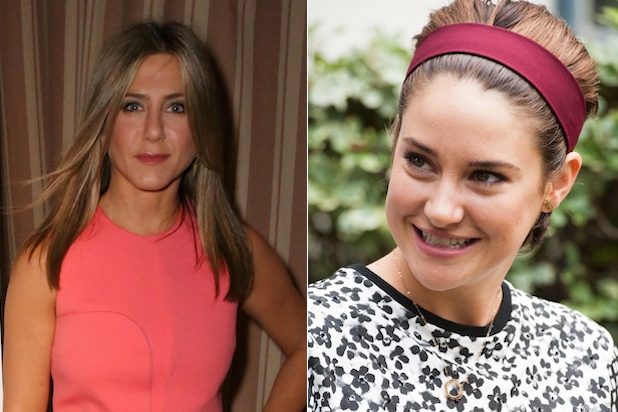 You won’t find Jennifer Aniston and Shailene Woodley at the top of any Oscar prediction polls these days, but you could find the two actresses meeting voters along the awards circuit this week.

There’s a good reason for that: This year’s Best Actress race could have room for dark-horse candidates to slip in if they play their cards right.

So Woodley returned from a camping trip in the mountains to meet voters, the press and some of their kids at a “The Fault in Our Stars” lunch at Craft in Century City on Thursday, while Aniston launched a full weekend of promotional work with a Sundance Sunset screening of “Cake” on Friday, followed by a reception at the Sunset Towers.

It’s a typical week in awards season even for actresses who can hardly be accused of being hard-core campaigners. When TheWrap mentioned to Aniston that she was facing a busy few days with a Q&A screening, a Soho House reception, a trip to Santa Barbara for another screening and Q&A, she looked surprised.

Told that we’d heard as much, she grinned. “I just go where they tell me to go,” she said. “I think I find out what I’m doing one hour at a time.”

So she hasn’t been part of the awards-season circus before?

Awkward, perhaps – but also a way to shine a spotlight on performances that might otherwise be overlooked. And with the way the Best Actress race is shaking out this year, there’s certainly no harm in trying to rattle a few branches and shake loose a few voters on behalf of Aniston and Woodley. (The same campaign team is behind both movies.)

The Best Actress conventional wisdom says that the favorites are Reese Witherspoon in “Wild,” Julianne Moore in “Still Alice,” Felicity Jones in “The Theory of Everything” and Rosamund Pike in “Gone Girl.” But “Wild” hasn’t been widely seen yet, “Still Alice” has been kept under wraps even more since its Toronto debut and “Gone Girl” isn’t exactly an Oscar-friendly film.

And while Amy Adams was originally all-but-ceded a nomination for her performance in Tim Burton‘s “Big Eyes,” the consensus after the first screenings of Tim Burton’s “Big Eyes” is that it’s a crowd-pleasing movie – with the Weinstein Company moving up its wide opening from January to December – but it might not be an awards movie, except for the Golden Globes comedy or musical categories.

So if Adams is merely a contender for a Best Actress spot rather than a sure nominee, suddenly the field is open, and the contenders numerous.

Hilary Swank in Tommy Lee Jones’ “The Homesman?” The movie drew mixed but largely admiring reaction in Cannes, while Swank is an enviable two-for-two with nominations and wins for “Boys Don’t Cry” and “Million Dollar Baby.”

Jessica Chastain for “The Disappearance of Eleanor Rigby?” She’s widely loved in Hollywood, but a confusing release pattern hurt the movie and may have overshadowed a tour de force performance.

Emily Blunt for “Into the Woods?” Rob Marshall’s Sondheim adaptation will begin screening in earnest this weekend, but musicals are always a tough sell, Anne Hathaway in “Les Miserables” notwithstanding.

Marion Cotillard in “Two Days, One Night?” The French actress won for “La Vie en Rose,” but she couldn’t even land a nomination for “Rust and Bone” two years ago, despite being a consensus pick to make the cut.

And with so many question marks hanging over the category, it came as no surprise to find the back-to-back events this week showcasing Woodley’s performance in “The Fault in Our Stars” and Aniston’s in “Cake.”

Both actresses face an uphill battle: Woodley is in a movie that was a huge hit in the summer, but one that was driven by the young-adult audience, which could put a stigma on it in the eyes of voters.

Certainly, the film’s writers, Scott Neustadter and Michael H. Weber, know better than to expect anything: “When we wrote “(500) Days of Summer” three years ago, everybody told us that we were a lock for a nomination, and we got nothing,” Neustadter told TheWrap at the film’s lunch. “With this one, lots of people saw it, but are they going to remember it? We have no expectations.”

But Woodley does in the film what she does in most of her films: Casually and without apparent effort, she always comes across onscreen as a real person having real conversations, not an actress playing a part.

“I wanted to write a completely non-sentimental cancer story, but I knew a studio would make it sentimental,” novelist John Green told TheWrap. “You needed an actress to go against that and make it completely real. And I was very lucky that Shailene loved the script and the book.”

Woodley, meanwhile, appears no more interested in waging an awards campaign now than she did for “The Descendants” three years ago, when she was widely thought to be a lock for a Best Supporting Actress nomination, but was overlooked by voters.

Back then, she hardly let the disappointment show, continuing to appear on behalf of the movie with the same carefree equanimity she’d shown before the votes were in. And when TheWrap saw her on Friday at Craft and dared to suggest that she’s become a movie star since we first made her acquaintance with “The Descendants,” she quickly wagged a finger in our face and said with a grin, “I will never be a movie star.”

Then she explained, “That’s just a word that other people use. It has nothing to do with me.”

Aniston, for her part, has been a movie star on occasion, and a TV star – and Emmy winner – since she became America’s sweetheart on “Friends” almost 20 years ago. But the light-comedy baggage she’s carried throughout her career is gone in “Cake,” in which she plays a woman responding to tragedy and chronic pain by popping pills and using anger as the fuel that enables her to get out of bed.

Director Daniel Barnz said his response upon hearing that Aniston was interested in the role was, “That’s unexpected.” But he thought of two films: “The Good Girl,” the 2002 indie in which Aniston was low-key and affecting, and “Ordinary People,” in which a previous generation’s TV-bred sweetheart, Mary Tyler Moore, turned in a wrenching dramatic performance.

“Cake” is small and the trick will be getting voters to see it. That, Aniston told TheWrap, is why she’s happy to keep to a hectic schedule of screenings and parties  – because it showcases an experience that was difficult but one that paid dividends.

“It was hard to live inside that body for all that time,” said Aniston of her character. “But it was also very rewarding – it was a chance to use the whole toolbox you learned in acting school, which you don’t get to do very often.”

Which side of the tracks will "We're the Millers" land on Jennifer Aniston's resume?