Jennifer Coolidge had such a horrible reaction to the spray tan she was doused with for Season 1 of HBO’s “The White Lotus” that it sent her to the emergency room.

As she told Allure (via Entertainment Weekly), the adverse reaction began during her flight to Hawaii, where the show’s first season was filmed.

“I didn’t want to look like a big, white marshmallow on the beach in Hawaii, so I got a spray tan,” she said. “I got on the plane and I started to feel really weird. By the time I got off the flight, I had to go to the emergency room.” 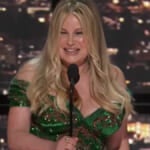 She also reacted to the “regular makeup” used for the series. “The minute we stopped filming, I would shower. I have such a quick reaction to stuff,” she said.

The actress, who recently won her first Emmy for playing the wealthy Tanya McQuoid on “Lotus” and made her TV debut in a 1993 episode of “Seinfeld,” added that she wasn’t always allergic to makeup, that it’s a reaction that popped up just a few years ago. “I was never someone who cared very much about ingredients,” she said. “Then, I’d say the last five or six years, I started getting allergic. My eyes would always be tearing up, but it never occurred to me that it was my makeup.”

Coolidge is set to return for the show’s second season, which is set in Sicily.

In addition to Coolidge’s win for Outstanding Supporting Actress, “The White Lotus” won 9 other Emmys, including Outstanding Limited Or Anthology Series, writing and directing awards for creator Mike White, and a Supporting Actor Emmy for Murray Bartlett, who plays Armond. 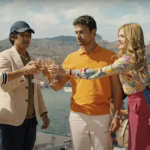