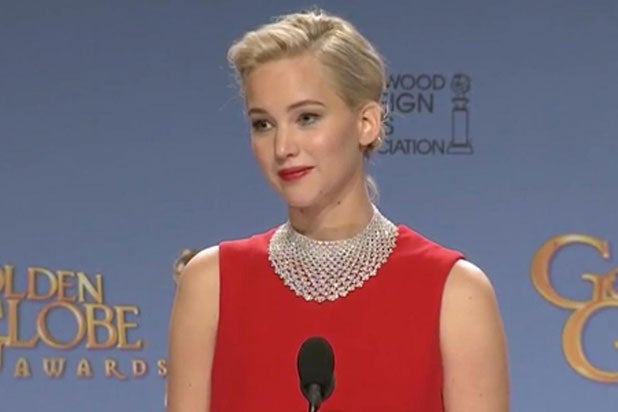 Are the Twitteratti turning on Jennifer Lawrence? The actress is doing her best to bear the crown of America’s Sweetheart, but it may have slipped when she scolded a reporter for using his phone while asking about her Golden Globes win.

Fans went on Twitter to express their feelings about the incident.

“Sooo guttered with how Jennifer Lawrence went on with the foreign reporter at the Golden Globes, proper put me off her,” one user tweeted.

See Video: Jennifer Lawrence Scolds Reporter for Being on His Phone

“It it takes being rude to a reporter for people to finally start hating Jennifer Lawrence, I’m all for it tbh,” said another.

Lawrence called out the reporter for being on his phone while he asked about her win for “Joy” backstage at the awards show on Sunday night.

“You can’t live your whole life behind your phone, bro,” said Lawrence to the reporter in question. “You can’t do that. You’ve got to live in the now.”

Some witnesses to the incident said the reporter wasn’t a native English speaker and was using his phone to translate the questions. However, some Twitter users who were present at the Q&A refuted the criticism. Chris Trondsen, a host on Pacific Rim Video, wrote, “He was taking pictures & video of Jennifer Lawrence while asking his questions & I even found it distracting.”

Whether the reporter was on his phone because he needed translation of his questions or whether he was actually being distracting isn’t clear in the video, but in any case, people are torn about whether to think Lawrence was rude or in the right to tell him off.

Sooo guttered with how Jennifer Lawrence went on with the foreign reporter at the golden globes, proper put me off her

am I the only one who thought Jennifer Lawrence's response to that reporter at the golden globes was rude AF?

Take it down a notch bro! You were rude to that reporter who was obviously foreign & maybe needed his phone. #JenniferLawrence #GoldenGlobes

#JenniferLawrence was rude to reporter on @goldenglobes #GoldenGlobes press room. Jennifer remember where you came from.

Jennifer Lawrence was arrogant. What if English wasn't that reporter's 1st language? What if he needed to translate or look at notes?

That Jennifer Lawrence, eh? Candid, quirky – wasn't it funny when she berated that repo… https://t.co/a9lSpIklx4 https://t.co/7c2n6smTM0

tchallaaaaaa: kinghardy: Jennifer Lawrence is so conceited the way she called out that reporter for being… https://t.co/iNmvFX9Dn7

Jennifer Lawrence showed a part that's covered by all the glamour, she was rude and classless when speaking to the reporter.

If you think Jennifer Lawrence is 'cool' and a 'hero' for calling out that reporter, you need to do more research.

I feel like the video of Jennifer Lawrence & the reporter was really rude, I hope that's not how she really is.