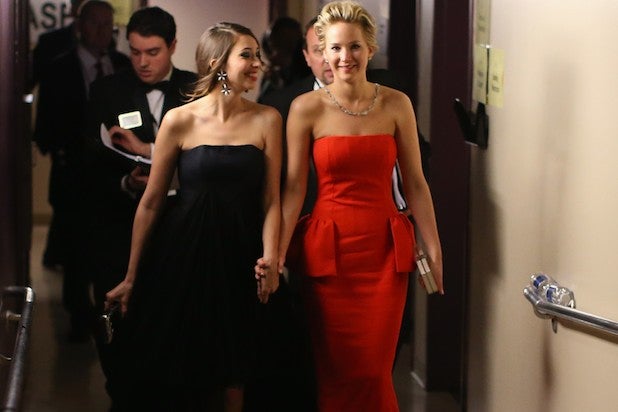 When Jennifer Lawrence tripped on the Oscars red carpet, she grabbed the back of an anonymous brunette wearing a Dior dress. Turns out, it was the “American Hustle” star’s best friend.

Laura Simpson, who became besties with Lawrence after the two met at an event seven years ago, wrote a blog post for MySpace documenting her Oscars experience as a non-famous guest — and it doesn’t sound pleasant.

Simpson described her awards experience as “completely exhausting, overwhelming and surreal,” concluding that “It is no wonder actors are crazy.”

The only thing crazier than actors, according to Simpson, might be the press.

“Unless you are famous at the Oscars, you are completely invisible. I have never experienced anything like it,” Simpson wrote. “The only time anyone talks to you is if you are in the way of his or her photo. Oh and photographers on the carpet yell, ‘YOU IN THE HUGE DRESS, GET OUT OF THE FU–ING SHOT!'”

Despite bumping into “a few weirdos” on her way with Lawrence to Guy Oseary’s after-party, Simpson had nothing but praise for the stars she ran into over the course of the night. Especially Brad Pitt.

“After the show we go backstage where I meet Brad and Angelina. [Pitt] smells amazing, like nothing I’ve ever smelled,” wrote Simpson. “Eventually we ask what cologne he’s wearing and he tells us, ‘I don’t wear cologne, it’s just my musk I guess.’ I have to choose not to believe him because it would just be unfair to mankind.”

She also saw Channing Tatum, who picked up the purse Simpson dropped, while Bill Murray acknowledged her with a wink on the dance floor.

Hollywood’s leading ladies also left quite the impression on Lawrence’s date. “I think what I took most away from the evening was how lovely all the women were,” Simpson wrote. “Actresses tend to get a bad reputation but every woman I met was lovely, witty and introduced themselves to me even though I wasn’t famous — even Anne Hathaway.”

And if anyone noticed how fast Kerry Washington’s hand went up in the air when host Ellen DeGeneres asked if anybody was in the mood for pizza, Simpson confirmed that Washington was not just joking around. The pregnant “Scandal” star even asked Simpson for a Slim Jim while they were hanging out in the green room (where there was more pizza).

For a night that came with pizza, Brad Pitt, a C-Tates sighting and a wink from a Ghostbuster, sounds like Simpson’s first date with Oscar could have been much worse.