After signing a first look film and TV deal with Netflix, Jennifer Lopez has set yet another project with the streamer, this time a science fiction film called “Atlas” that “San Andreas” filmmaker Brad Peyton will direct.

In “Atlas,” Lopez will play a woman fighting for humanity in a future where an AI soldier has determined the only way to end war is to end humanity. To out-think this rogue AI, Atlas must work with the one thing she fears most — another AI.

Aron Eli Coleite wrote the latest draft of the screenplay based on an original script by Leo Sardarian.

Joby Harold and Tory Tunnell will produce “Atlas” for for Safehouse Pictures, as will Brad Peyton and Jeff Fierson for ASAP Entertainment and Jennifer Lopez, Elaine Goldsmith-Thomas and Benny Medina for Nuyorican Productions.

Courtney Baxter is the executive producer, and Matt Schwartz is a co-producer.

“Atlas” falls under Lopez and Nuyorican Productions’s deal with Netflix where Lopez, Goldsmith-Thomas and Medina will produce a slate of films, television series, scripted and unscripted content, with an emphasis on projects that support diverse female actors, writers and filmmakers. Lopez also has two other films in the works with Netflix, “The Mother” and “The Cipher.”

“I’m so honored to be working with Jennifer, Elaine and the rest of the team at Nuyorican Productions along with our partners Joby and Tory at Safehouse,” Peyton said in a statement. “Having the chance to direct Jennifer in the title role of this movie is a dream come true, as I know she’ll bring the incredible strength, depth and authenticity we’ve all come to admire from her work. Furthermore, Jeff and I are so excited to be back working with Scott, Ori and the entire team at Netflix. They have been nothing short of amazing to work with and we are blessed to have the opportunity to make another movie on the service.” 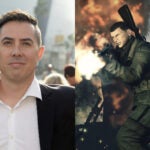