A24 might have found its cutest movie yet. The studio released a trailer for “Marcel the Shell with Shoes On” Tuesday, which is the first feature-length mockumentary about the tiny shell with a big personality.

In the film, Marcel the Shell is on a mission to find his family. Marcel currently lives with his grandmother Connie and their pet lint, Alan. They were once part of a sprawling community of shells, but they now live alone after surviving a mysterious tragedy.

“It’s pretty much common knowledge that it takes at least 20 shells to have a community,” Marcel explains in the trailer, which you can watch above. “My cousin fell asleep in a pocket, and that’s why I don’t like the saying ‘Everything comes out in the wash,’ because sometimes it doesn’t. Or sometimes it does, and they’re just a completely different person.” 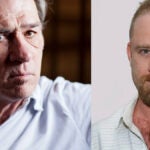 The little family now lives a quiet existence. Their favorite past time is watching “60 Minutes.” However, sometimes Marcel can’t help but wonder where his family is — if they’re out there in the world somewhere.

So, he decides to be fearless. Set to the tune of “Take Me Home” by Phil Collins, the second half of the trailer shows Marcel taking on the world to find the connection he so desires.

“Marcel the Shell with Shoes On,” is directed by Dean Fleischer Camp, who originally created the character with Jenny Slate via three short films and two children’s books, beginning in 2010. Slate voices the iconic seashell once again.

The film also stars Isabella Rossellini, with Rosa Salazar, Thomas Mann, and Lesley Stahl. The film is set to be released on June 24.