“Jeopardy!” champion Amy Schneider has hit another show milestone, jumping to No. 2 on the all-time consecutive wins list with only Ken Jennings on the path ahead.

Although that is no small feat and certainly nothing to sneeze at, Schneider is barely past the halfway point to reaching Jennings’ 74 wins since he set the record in 2004. He is, in fact, getting an unusually close look at just how good Schneider is at the trivia game, as he has been hosting “Jeopardy!” during much of her streak. 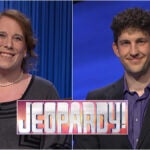 “It still feels unreal,” Schneider said. “Knowing that I had this chance, I was definitely thinking about it. Then Ken said it, and I thought, ‘Alright, I just accomplished this huge thing’ and it was pretty great.”

On Friday, Schneider clocked in her 38th consecutive win with $54,000, tying Matt Amodio for the second-place record. Schneider and Amodio will face off in the next edition of the Tournament of Champions, and she has a message for him: “It’s going to be an honor playing against you, and it’s going to be a tight competition.”

Earlier this month, she became the fourth person and first woman to pass the million-dollar mark. She’s also the first transgender contestant to qualify for the Tournament of Champions. 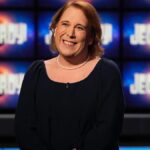