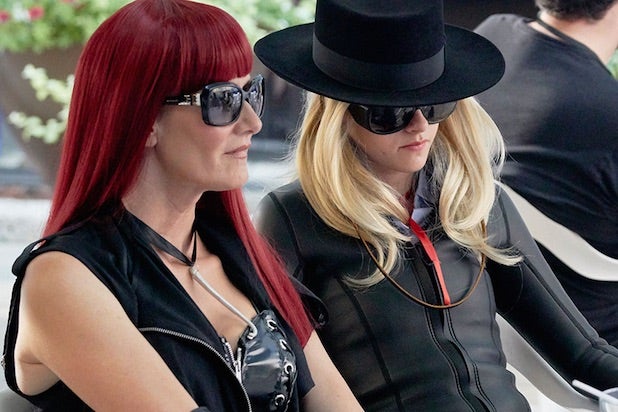 Justin Kelly’s “JT LeRoy,” tells the true story of author Laura Albert (Laura Dern), who published a series of books under the name JT LeRoy and enlisted her 25-year-old sister-in-law, Savannah Knoop (Kristen Stewart), to pose as the androgynous LeRoy in public appearances. When the deception was uncovered, Albert was successfully sued for fraud.

But before that, actress Asia Argento wooed “LeRoy” and bought the film rights to one of the books, “The Heart Is Deceitful Above All Things.” She turned it into a film in which she played the LeRoy character’s mother, and her son was played by an 8-year-old actor named Jimmy Bennett.

Argento is fictionalized in Kelly’s film, played by Diane Kruger as a character simply named Eva. But she broke into the news last year just before the film’s premiere at the Toronto Film Festival, facing accusations by Jimmy Bennett that she sexually abused him — not during the making of “The Heart Is Deceitful,” but nine years later. (She denied the accusation.)

With Kruger playing a significant role in the film while the Argento saga plays out in the press, Kelly’s film risks being overshadowed by a story that has very little to do with what’s on screen. If “JT LeRoy” was more compelling, it might be able to overcome that — but instead it’s a well-acted curiosity that never quite manages to be as intriguing as it should be.

Partly, that’s because of the point of view it employs. The film was based on Knoop’s memoir, “Girl Boy Girl: How I Became JT Leroy,” and it is mostly told from her perspective. But she’s a passive character who only slowly comes to have much agency in what she’s doing; Albert is clearly the more interesting of the two women, which makes it frustrating that we don’t get more from her.

In fact, the story begins in mid-deception, with no attempt to explain how or why Laura Albert felt it necessary to create the LeRoy persona. “They use us, we use them,” she says breezily, and Knoop goes along for the ride because, well, because Laura seems cool, and why not?

She’s simultaneously a fascinating character and an annoying one whose default mode is borderline desperation of one kind or another.

Stewart, meanwhile, is no doubt the right actress for Knoop — a young woman who seems remote and a little sullen, wary of but intrigued by the mess she finds herself in. The role really only requires the right presence, and Stewart has it, but the character makes for a frustratingly inactive central figure, despite a few emotional fireworks when the Eva character’s sexual interest in her wanes once the film rights are secured.

It’s hard to feel much sympathy for Albert, who feels entitled to continue the deception and affronted when it begins to unravel, or for Knoop, who is neither comfortable with the part she’s playing nor disgruntled enough to stop doing it.

Kelly, whose previous films include 2015’s “I Am Michael” and 2016’s “King Cobra,” is no stranger to exploring issues of sexuality, often with a little controversy attached. But “Jeremiah Terminator LeRoy” is a lukewarm examination of what might have been a hot topic — and that means it risks being overshadowed by the real-life soap opera playing out around it.