With the death of Jerry Lee Lewis on Friday, conventional wisdom might call for a quip along the lines of “Well, Keith Richards and Willie Nelson had better watch their backs now.” But lumping in Lewis with those other hard-living, seemingly indestructible musicians somehow feels cheap; like them, he was utterly, defiantly, brilliantly singular, from the first time he pounded the piano keys or kicked over a bench to the way Kris Kristofferson came to Lewis’ sickbed to deliver the Country Music Hall of Fame citation that was only overdue by about half a century.

Jerry Lee Lewis whipped up an unholy racket in his glory days of the 1950s, and unholy was a key word. Raised in the fire-and-brimstone church that also produced his cousin, Jimmy Swaggart, he was drawn to rhythm and blues music while never really convincing himself that Jesus was OK with him playing that salacious music of the flesh. He was a protean piano player, a strutting peacock and a tortured Christian who helped create the blueprint for rock ‘n’ roll and took the art of performance to crazy extremes; there are lots of different ways in which his nickname, the Killer, was an apt one.

You could take a single song of his – and if you do, “Whole Lotta Shakin’ Goin’ On” is the one to take – and follow its live performances over the years for a master class in the art of lascivious vocalizing, one that Steven Tyler and Mick Jagger would be hard-pressed to approach. In fact, Ethan Coen pretty much based his recent Jerry Lee documentary “Trouble in Mind” around live performances of that song, each one more delightfully perverse than the last. 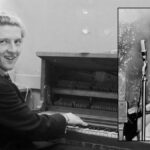 And even when he slowed down – hey, losing your career because you married your 13-year-old cousin will slow a man down – Jerry Lee made it clear that he hadn’t really lost a step. Coen’s movie begins with a 1970 clip from the “Ed Sullivan Show” of Lewis performing the Mickey Newbury country lament “She Even Woke Me Up to Say Goodbye” – and as I wrote in my review of the film at the Cannes film festival, the performance is nothing like the full-on assaults for which Lewis is best known. But even that relatively subdued performance is a delicious treat, because in the smallest of gestures, in the hint of smirk and the raised hand that suddenly drops to the keyboard, Lewis displayed a casual virtuosity that let you see the wild man he could still be if he felt like it.

The guy carried himself like he was the coolest, meanest SOB in any room, and it could be intimidating. My one encounter with Jerry Lee is among the weirdest and most memorable from the years in which I wrote about rock ‘n’ roll, and I can’t resist telling it one more time here.

It happened in December of 1988, when I spent a week in Memphis reporting for Rolling Stone on the shooting of the Jerry Lee biopic “Great Balls of Fire!” The Killer was sporadically on the set during that week, and he and the film’s star, Dennis Quaid, would eye each other warily, two strutting alpha males unaccustomed to yielding the upper hand to anybody.

As one point during that week, producer Adam Fields drove me to Lewis’ house outside Memphis for a sit-down interview. Jerry Lee kept us waiting for a while before he unlocked the security gate in the hallway and walked into the living room in a powder-blue jumpsuit, reeking of cologne so strongly that I smelled him before I saw him. He looked at me, frowned and turned to Fields. “I thought you said you were bringing a woman,” he said.

“No,” Fields said quickly. “This is Steve. He’s from Rolling Stone.”

Jerry Lee shook his head. “No, you said you were bringin’ a woman.”

After that auspicious beginning, Jerry Lee and I settled into overstuffed chairs in his Southern Baroque living room. (Go to the homes of enough early rock ‘n’ rollers and you’ll realize that they’d all have had their own Gracelands if they had Elvis’ money.) He was a cagey interview, snapping at me occasionally, never really engaging and clearly harboring some suspicions about this film they were making about him.

He also grew increasingly irritable as the interview went on, particularly when I brought up the idea that he might have been torn about his career because he once considered rock ‘n’ roll the devil’s music.

“Where’d you hear that?” he snapped. “There might have been some bulls— like that in Myra’s book, but that’s not true.” (Myra Gayle Brown, the cousin he’d married 31 years earlier and later divorced, had written a book and was played in the film by Winona Ryder.) “Now, for all I know the Lord of Darkness might have had something to do with it, but I don’t know where you got that s—.”

Momentarily distracted, he yelled at his sixth wife, Kerry McCarver, to bring him his whiskey. She offered a couple of different bottles, but they were the wrong brand, and Jerry Lee got angrier and angrier while she scoured the house for the Crown Royal. Then he suddenly turned and fixed me with a glare.

Gulp. At this point, I was well aware that the last two major stories in Rolling Stone about Jerry Lee had delved into the suspicious and premature deaths of his fourth and fifth wives. I wasn’t terribly eager to discuss those stories with a cantankerous, cologne-drenched guy called the Killer whose favorite whiskey had gone missing. But I had no choice but to admit that yes, I was from Rollin’ Stone magazine.

Well, I said cautiously, I enjoyed it, even if I didn’t always agree with things the magazine wrote. (I believe this was a feeble attempt to leave myself an escape hatch.)

Jerry Lee nodded slowly, then shrugged. “I admire people who can do what you do,” he said. “You travel around talkin’ to different people.” A pause. “You talk to crazy piano players … ”

At that point he might have grinned, just a little.

Then his wife found the Crown Royal, which had been in the glove compartment of his car.

He poured some and smiled. I took a shot and heaved a sigh of relief.

And that was that.

The “Great Balls of Fire!” movie came out the following summer. It was terrible. “They made it look like the Dukes of Hazzard invented rock ‘n’ roll,” T Bone Burnett (who worked on the movie) would tell me later. Dennis Quaid was a flat-out cartoon as Jerry Lee, his embarrassingly over-the-top performance only slightly redeemed by the fact that it wasn’t all that far off from the real guy.

Oh, and on the soundtrack to that terrible movie, Jerry Lee Lewis insisted on re-recording his own vocals rather than letting Quaid do his own singing. The album that came out consisted of a bunch of new versions of old songs — Jerry Lee at 55 pretending to be Jerry Lee at 21 — none of which had much reason to exist. But then there was “That Lucky Old Son,” and by God it was magnificent – heartfelt, heartbreaking and as moving as anything he’d ever recorded.  “Show me that river, take me across / And wash all my troubles away,” he sang with wrenching authority. “Like that lucky old sun with nothin’ to do / But roll around heaven all day.”

He made more music after that, and some of it was pretty good. But I’ll still go back to the Jerry Lee I met on that afternoon in 1988, cantankerous and fiery and then, all of a sudden, surprisingly self-aware. That Jerry Lee still had a story to tell, and a song to sing.

Goodness, gracious… You know the rest.