Maybe nothing can live up to the legacy of "Seinfeld," but if you had to chart Jerry Seinfeld and Larry David's careers following that show, as David might put it, they've both been "Pretty, prettyyy, pretty good."

With Seinfeld's recent Netflix special "Jerry Before Seinfeld" and the return of "Curb Your Enthusiasm," TheWrap's Sean Burch and Brian Welk have pitted the post-"Seinfeld" careers of both comics against each other in an epic battle royale... about nothing.

Sean Burch: You'd have to be on bath salts to debate this one. Somehow, Larry David followed up the "best sitcom in TV history" with an even better comedy series. "Curb Your Enthusiasm" is R-Rated "Seinfeld." I can cherry pick moments all day: Larry debating the proper cashew-to-raisin ratio with David Schwimmer, celebrating (in error) that he doesn't have to donate a kidney to Richard Lewis, getting high and grilling himself in the mirror, murdering the black swan at his country club,  or yes, somehow finding a way to feud with Michael J. Fox (and lose). We love LD because he's the "social assassin" -- able to say and do things we'd never have the fortitude to actually do in real life. Case in point: Remember when he yelled at a Sammie, the teenage daughter of his manager, for singing and waking him up?

There's a reason we've been clamoring for a new season of "Curb" for five years, rather than a "Marriage Ref" reboot. And is there anything worse than car or coffee snobs? No, of course not, but somehow Seinfeld combined both aspects for "Comedians in Cars Getting Coffee." David, meanwhile, should win for introducing us to Leon "I brings the ruckus" Black alone. Just mark this down as a win for LD.

Brian Welk: First let me say, I'm not on bath salts, but if I were, even I wouldn't be stupid enough to out and out criticize Larry David. Criticizing Larry David in 2017 weirdly feels like criticizing Beyoncé. It's just not going to end well for you. Though I feel being "R-rated Seinfeld" is kind of what keeps "Curb" from being as good as "Seinfeld." "Curb" is a little like watching "Seinfeld" and getting nothing but George Costanza. It's a great show, but it's not the ultimate show about nothing.

That said, I've chosen to argue in defense of Seinfeld. Are you aware that "Comedians in Cars" has been on air since 2012? It's surprisingly successful. And in that time, it has quietly disrupted the talk show format, pushing the genre into bite-sizes online with no frills, no production values and celebrities being their authentic selves. The title of the show delivers exactly what it promises. But I like it because Seinfeld clearly enjoys his own show. He only invites other comedians i.e. people he actually likes. He talks with him about comedy in smart ways you won't find elsewhere. He goes to diners he enjoys, he drives in fancy cars that people want to look at, and he couldn't care less about the rest. Who else but Jerry Seinfeld would get time to sit down with Obama and not ask him one important question about literally anything? "Comedians in Cars" is the reason "Carpool Karaoke" exists. It's the reason David Letterman is getting a blank check to do whatever he wants on Netflix. It's about nothing and it's trivial, but I hope he keeps doing these forever. 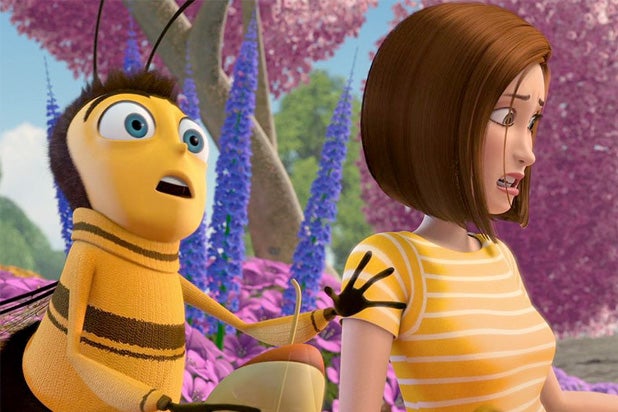 BW: Man, talk about a brutal round. Seinfeld has always been vocal about not liking the idea of doing a movie. He's very meticulous in perfecting the timing and mechanics of a joke by observing how a crowd reacts to it, and making a movie for two years is not that.

Perhaps more importantly, Seinfeld can't act as anyone other than himself. Even if he's playing a bee, why bother? Literally the only thing I remember from "Bee Movie" is that a courtroom was stunned (STUNNED, Jerry!) to learn that the lead singer of The Police's real name was not "Sting." His 2002 documentary "Comedian" though is underrated and a good primer for "Jerry Before Seinfeld." As for David, on paper, David is as good of a Woody Allen surrogate as any, but "Whatever Works," in which David starred, is a strong contender for Allen's worst film.

SB: Look, you said it already -- this is brutal. Only one movie has let me down more in the last 10 years than "Clear History," starring David, and that was "The Master" (RIP to the great Philip Seymour Hoffman). The set-up was there: A beaten-down entrepreneur (David) emerges 10 years after cutting ties with the business partner (Jon Hamm) he created an uber-popular electric car with, leading to a decade of public humiliation -- only to be confronted by him on Martha's Vineyard.

It, uh, didn't pay off.  The same goes for "Whatever Works." "Bee Movie" was a train wreck, but I'll agree with you on "Comedian" being underrated. If I need to concede this round just to get the hell out of here, so be it. 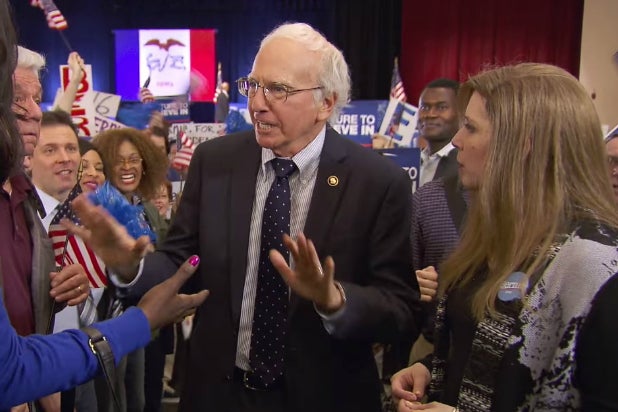 BW: Casting Larry David as Bernie Sanders was a no brainer, but even he was number #4 behind Kate McKinnon, Alec Baldwin and Melissa McCarthy among "SNL" impressions this season. Seinfeld on the other hand always delivers whenever he's called upon. His episode of "30 Rock" is the show at its goofiest and most meta. Him saying, "Roker, in a Bee Costume!" may be the lone justification for the existence of "Bee Movie." But I'd like to point to his cameo in an episode of "Louie." There was a joke during "Seinfeld" that Jerry could never get mad or never be seriously unhappy or unlikable. Louis C.K. cracked that nut when he directed Seinfeld. When he's on screen, it's never played for laughs, and he's genuinely authoritative and tough to watch. It's a remarkable performance

SB: No offense to Seinfeld, but I didn't even know those cameos existed. Larry David, on the other hand, became synonymous with his (distant cousin!) Bernie Sanders during the 2016 election. David synthesized his trademark emphasis on minutiae with Sanders' orneriness, culminating in the top notch "Bern Your Enthusiasm" hybrid sketch. Picturing Sanders avoiding coughed-on hands on the campaign trail was unavoidable after that skit. If you think that takes a backseat to Kate McKinnon as Hillary Clinton, hey, I don't know what to tell you. Also, let's not forget LD going full "Curb Larry" on "Hannah Montana,' trying and failing to score a restaurant table by lying about his daughter's birthday. 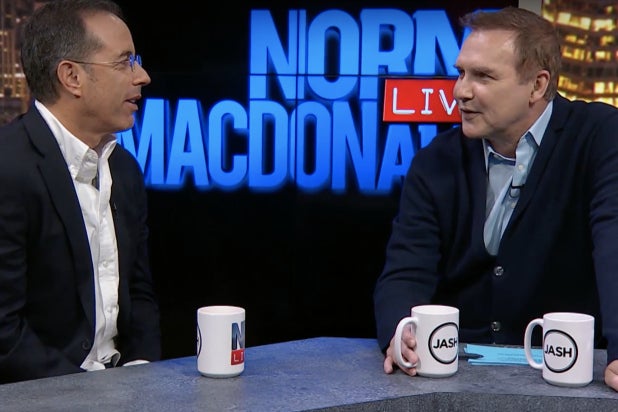 SB: We don't know much about Seinfeld, other than he likes Superman and dating 17-year-olds (too harsh?). Again, we love David because of his "no sacred cows" mantra. Of course there's plenty we don't know about him, but his openness is refreshing -- and that translates well to his public appearances. We get excited he's on a late night show because he's bound to say anything -- nothing is off limits or too obscure. Just look at his appearance on Jimmy Kimmel last week, where he revealed one of his best qualities is that he's a "good mourner." Or what about when Conan asked him if he's concerned women only like him for his fame? "What, are you nuts?" said a bemused David.  "Why would I care? Are they supposed to like me for me?"

BW: I don't quite get how everyone adores Larry David but the Internet thinks Seinfeld is too rich, snobby and out of touch. He's not the only comedian who has taken a stand against political correctness, but he often gets the most flack for it. He got some ire when he said on Colin Cowherd's show that many kids use buzzwords but "they don't know what the hell they're talking about." He was even criticized for having too many white male comics on his show in its early days. It's fair to say Larry David has never had to deal with that. What I like about Seinfeld is that he has adopted some of David's curmudgeon behavior in his late career. He cares less about stuff, he's bitter and surly, and yet he's still goofy and venting his frustrations about the insignificant things in life. And his recent snubbing of Kesha has become a thing of legend.

Also Read: Jerry Seinfeld Practically Runs From Kesha as She Tries to Hug Him in Awkward Run-In (Video)

SB: You said it yourself, Brian: Seinfeld has, as he's grown older, increasingly adopted David's irreverent behavior. To me, it's just another example of David being the comedic brains behind "Seinfeld," and well, Seinfeld it appears. The reason David's curmudgeonly act works is because it's authentic, it taps into our inner-most desires to tell people off, and damn does it translate well to late-night guest appearances. 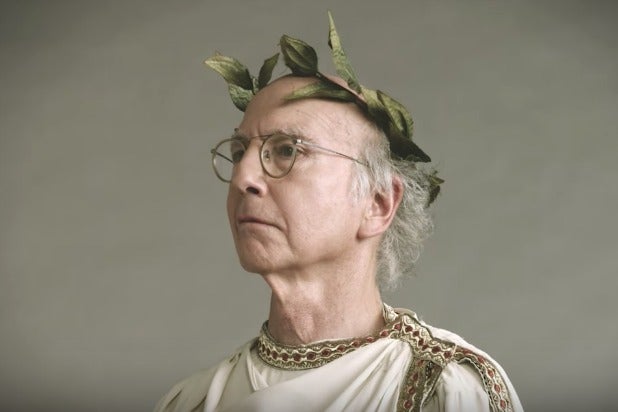 BW: If the new season of "Curb" is more of the same Larry David as before, people will be relieved to have it back. If he never once says "Trump" or does anything political, no one will bat an eye. "Jerry Before Seinfeld" is solid, certainly not his best stand-up special or what you might expect from a massive comedy comeback on Netflix, but while most reviews have been warm, many have also chided him for some navel gazing, arguing his material about left-handed people and riding "on" a train (not in it) aren't exactly fresh. Personally, I'm glad we have a comedian like Seinfeld who doesn't have to pretend he's a pundit in order to be funny.

SB: I didn't think "Jerry Before Seinfeld" was as boring and trite as many of the reviews made it out to be either. Checking out Seinfeld's old stomping grounds, including where he had his comedy-epiphany at 21-years-old, was pretty cool. Having said that, the B- performance will likely be a bar the new season of "Curb" will be able to clear. The show is coming off, in my humble opinion, it's best season ever, and now David has five years of slights built up to unleash. As Richard Lewis says in the hilarious preview, David is "devoid of anything that's remotely caring and empathetic." That's good news for everyone, and I can't wait to see David's lack of empathy back in action, starting this Sunday.

Wading in to the sea of Emmy statues, champagne, and flashbulbs, the winners from "Big Little Lies," "Atlanta," "Veep," and "The Handmaid's Tale" soaked in their victories at the Governors Ball, FX and Fox's party, and HBO's mega bash amongst others after the Emmys on Sunday night (Sept. 17).