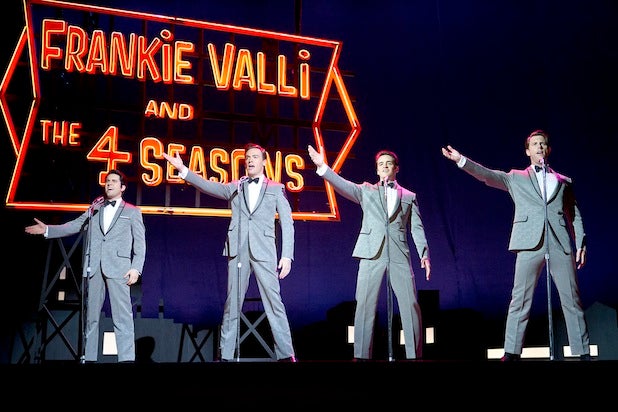 “Jersey Boys,” the Tony Award-winning Broadway musical, soared to critical and commercial success largely on the catchy tunes that made Frankie Valli and the Four Seasons musical legends. But when it comes to the big screen version, critics seem to agree — Clint Eastwood has made a movie that may have left too many of the musical group’s iconic songs on the cutting room floor in favor of focusing on their offstage drama.

The R-rated musical chronicles the shady dealings and mob ties of Frankie Valli and his bandmates, and their subsequent rise to fame as the crooners of such hits as “Sherry,” “Big Girls Don’t Cry” and “Can’t Take My Eyes Off You.” The movie runs at over two hours and currently has a 60% fresh rating on Rotten Tomatoes.

Alonso Duralde of TheWrap says the film “fulfills the duties of a jukebox musical: it works in the hits, and it casts singers who make those hits sound virtually identical to the original versions. What the movie doesn’t do is answer the question, ‘Why did I just spend 134 minutes watching the Frankie Valli episode of ‘Behind the Music’?'”

Claudia Puig of USA Today summarizes, “the catchy hits by The Four Seasons are indelible, but ‘Jersey Boys,’ the drab movie based on the Broadway musical about those tunes, is sadly forgettable.” She goes on to point out certain stories that made sense on stage don’t quite work on screen.

Puig adds, “The gee-whiz innocence of Frankie Valli, (played by John Lloyd Young, the Tony-winning originator) worked fine in the musical because it suited the rousing melodic renditions. But, in the expanded screen tale, Frankie’s pal and bandmate Tommy DeVito (Vincent Piazza) comes off as a sociopath, rather than a two-bit hustler. The movie tries to have it both ways, seeking to be a more honest, R-rated portrayal of the pop band while retaining the group’s clean-cut image. What emerges comes off like a slightly edgier, more harmonic episode of Happy Days.”

Time’s Richard Corliss was not kind on the film, calling it “a turgid botch,” blaming it on Eastwood’s emotional distance from the music during the era in which it originated. “Eastwood is mature jazz; they’re teen pop. When the movie’s Gaudio (Erich Bergen) watches a 1961 episode of Rawhide, with Eastwood romancing Gloria Talbott, you realize that Eastwood was already in his 30s, too old to feel the Seasons’ seismic jolt.”

In a dissent from the pack, Rex Reed of the New York Observer is no fan of the music (“Clint Eastwood hates the bubblegum pop-rock noise of all those ’50s groups like The Four Seasons as much as I do”). But he gave the film a positive review, because “despite all that crummy doo-wop, it’s a universal, American “anyone can make it” success story that has uplifting appeal onstage, and in Mr. Eastwood’s capable hands, the joy spreads like apple butter.”

Peter Howell of The Toronto Star seems to put it best, because despite what individual critics may think, now everyone who wanted to but couldn’t afford to see “Jersey Boys,” which is still going strong on Broadway and showing no signs of slowing down, will now get the chance. “The film entertainingly recreates an acclaimed stage show that you can now see for the price of a multiplex ticket rather than a Broadway one,” Howell writes.