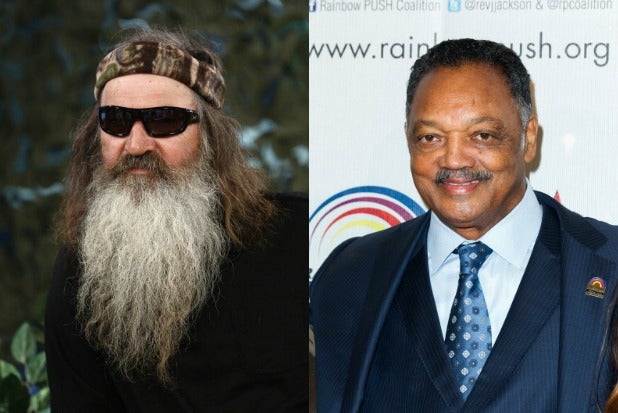 Time is running out on the Rev. Jesse Jackson’s demand for a meeting with A&E executives about “Duck Dynasty” patriarch Phil Robertson, a man he says has done something “more offensive” than the bus driver who ordered Rosa Parks to move to the back of his bus.

On Monday, Jackson, head of the Rainbow PUSH Coalition, demanded a meeting within 72 hours over his claim in a GQ interview that African-Americans were perfectly happy before Civil Rights. Rosa Parks helped launch the movement when she refused to give up her seat to a white passenger on Dec. 1, 1955.

“These statements uttered by Robertson are more offensive than the bus driver in Montgomery, Alabama, more than 59 years ago,” Jackson said in a statement. “At least the bus driver, who ordered Rosa Parks to surrender her seat to a white person, was following state law. Robertson’s statements were uttered freely and openly without cover of the law, within a context of what he seemed to believe was ‘white privilege.'”

A&E did not respond to a request for comment Thursday on whether it would meet with Jackson. Jackson also wants GLAAD and executives from Cracker Barrel to attend the meeting. The restaurant chain initially decided to pull “Duck Dynasty” merchandise, but reversed itself after “Duck Dynasty” fans rose to Robertson’s defense.

A&E has already suspended Robertson for the comments he made in the interview. His remarks on Civil Rights have been largely overshadowed by his remarks about homosexuality. In the interview he grouped gays with “drunks” and “terrorists” and said he didn’t understand how anyone could prefer a “man’s anus” to a vagina.

In his comments on race, the 67-year-old described his childhood in the backwoods of Louisiana.

“I never, with my eyes, saw the mistreatment of any black person,” he said. “Not once. Where we lived was all farmers. The blacks worked for the farmers. I hoed cotton with them. I’m with the blacks, because we’re white trash. We’re going across the field…. They’re singing and happy. I never heard one of them, one black person, say, ‘I tell you what: These doggone white people’–not a word!… Pre-entitlement, pre-welfare, you say: Were they happy? They were godly; they were happy; no one was singing the blues.”