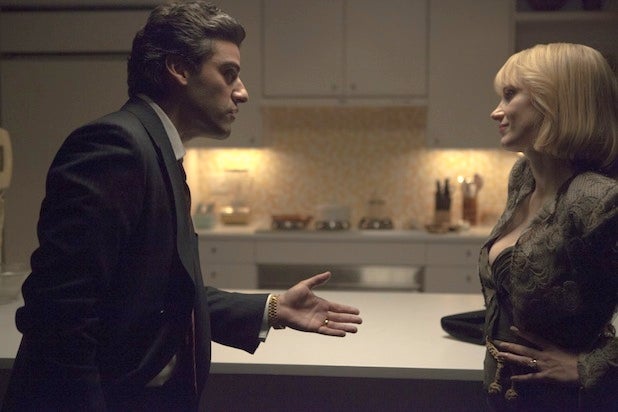 The world premiere of director J.C. Chandor’s drama “A Most Violent Year,” starring Jessica Chastain and Oscar Isaac, will be the opening-night gala of the AFI Fest 2014, the American Film Institute announced on Wednesday.

The film will screen at the TCL Chinese Theatre on Thursday, Nov. 6 to kick off the eight-day festival in Hollywood.

“A Most Violent Year” is the third feature from writer-director Chandor, who made his debut with (and received an Oscar nomination for writing) “Margin Call” in 2011 and released “All Is Lost” last year. His new film is a crime drama set in 1981, one of the most crime-ridden years in record in New York City. In addition to Chastain and Isaac, it stars Albert Brooks, David Oyelowo, Alessandro Nivola, Elyes Gabel and Catalina Sandino Moreno.

The film, from Participant Media, will be released by A24 in December, in time to qualify for this year’s Oscar race.

The full AFI Fest lineup, which normally consists of evening galas featuring major awards contenders along with an expansive program of foreign films and independents, will be announced in October. Previously, the festival revealed that it will mount a special tribute to Sophia Loren on Nov. 12.

Audi is the festival’s presenting sponsor for the 11th year.

Tickets will be free for most public screenings at AFI Fest, although access to reserved seats at galas is limited to patrons who purchase special packages and passes at AFI.com/AFIFEST.