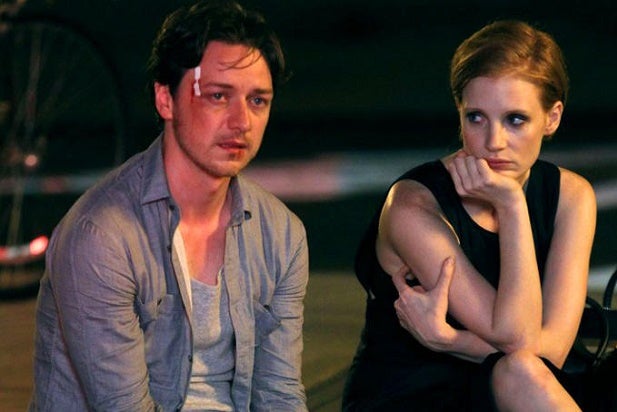 Breakup drama “The Disappearance of Eleanor Rigby,” starring Jessica Chastain and James McAvoy, stumbled in its expansion this weekend.

The Weinstein Company drama — a distillation of two complimentary films that originally recounted a couple’s split from the male and female’s perspective — expanded from four to 136 theaters and took in $169,700, for a soft $1,248 per-screen average.

TWC bought the rights to the two movies — both written and directed by Ned Benson — after they premiered at the Toronto International Film Festival last year. They recounted a couple’s disintegration after tragic circumstances surrounding their young child, from the perspective of the man and the woman.

Also read: Jessica Chastain on the ‘Torture’ of Major ‘Eleanor Rigby’ Changes: ‘I Was Shocked and Scared’

For commercial reasons — selling “his” and “her” versions of a film would have been very tricky — the decision was made by TWC to create a third, combined film.

“In this day and age, getting the theatrical experience, it’s hard to get people to go see the movie, and much less a three-hour-and-ten-minute, two-part character movie,” Benson told TheWrap earlier. “I’m really proud of it, don’t get me wrong, but as a filmmaker, you want to have your movie have the broadest reach.”

Moviegoers will still get to see the two separate films. Weinstein will put “Him” and “Her” in limited release on Oct. 10.

TWC also opened its adventure tale “Tracks,” starring Mia Wasikowska and Adam Driver, in four New York and Los Angeles theaters and it brought in $21,544. That’s a soft $5,385 per-screen average for the film, which recounts Robyn Davidson’s nine-month journey across the Australian desert.

“Hector and the Search for Happiness,” a British romantic comedy starring Simon Pegg and Rosamund Pike, opened on four theaters and brought in $46,000 for Relativity Media.

Also read: Simon Pegg Travels the World in ‘Hector and the Search for Happiness’ Trailer (Video)

That’s an OK $11,500 per-screen for the film, directed by Peter Chelsom, who co-wrote with Tinker Linday and Maria von Heland, based on François Lelord’s novel of the same name.

Elsewhere among independent releases, Kevin Smith’s quirky horror comedy “Tusk” debuted on 602 theaters and brought in $886,144 for a $1,339 per-screen average that put it at No. 15 nationwide.

Distributor A24 looked on the bright side, noting that it was “the best opening ever in the man being turned into a walrus genre.”

Roadside and Lionsgate’s “The Skeleton Twins” expanded to a total of 10 markets and 49 screens in its second weekend and did well, grossing an estimated $447,500. That’s $9,132 per screen for the dramedy starring Kristen Wiig and Bill Hader as estranged siblings.

The plan is to expand into the top 75 markets and approximately 375 runs next weekend, Roadside said Sunday.

Also read: How Movies With Dead Stars Have Performed at the Box Office

Fox Searchlight expanded “The Drop” by 383 theaters in its second weekend and the crime drama starring the late James Gandolfini brought in just over $2 million from 1,192 locations for a so-so per-screen average of $1,720. The overall domestic total for the film, which co-stars Tom Hardy and Noomi Rapace, is $7.6 million.