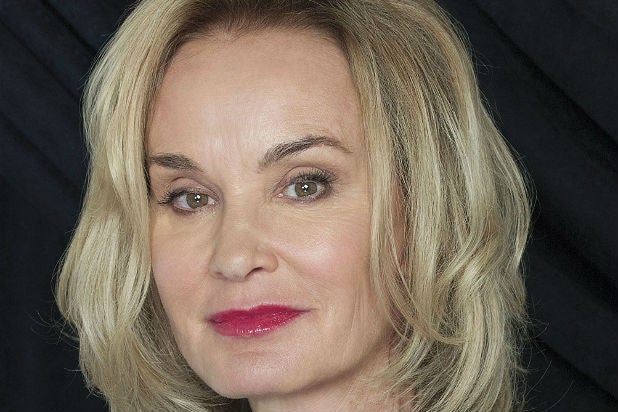 has been the powerhouse female lead of FX’s “American Horror Story” for four years, and a symbol of female empowerment throughout her film career, but she’s not immune to conversations in the air this week about sexism and ageism in show business.

“Hollywood is run with this male point of view. Even if a woman runs a studio, she still does it with a male point of view. And as long as that exists, you’re still going to have this wish fulfillment,” Lange said during an interview for an upcoming issue of TheWrap Magazine.

“That men continue to be fascinating and attractive and virile, and women age and are no longer sexual or beautiful — it’s a fantasy that has nothing to do with reality.”

Her comments come on the heels of a Wednesday interview TheWrap conducted with Maggie Gyllenhaal, wherein “The Honorable Woman” star revealed her anger and disappointment when she was informed that her age of 37 was “too old” to be cast as love interest to a 55-year-old man.

Lange wonders, “why would a 37 year old want to play opposite a 55-year-old man?”

“When I was in my thirties I wasn’t fascinated by 70-year-old men. But then, I didn’t have to be. It’s classic Hollywood, ” Lange posed while speaking from her home in New Orleans. “I’m glad the media has picked up on it, but it’s certainly not a new phenomenon.”

Lange’s swan song for the “Horror Story’ anthology, which has changed themes and characters each year while retaining most of the cast, was as Elsa Mars, the head of a traveling freak show. If she’s learned anything during her tenure as Ryan Murphy‘s horror queen, it’s about the human response to the inevitability of death.

“I think a lot of it is fear of mortality,” Lange said of the male lens on entertainment. “One’s mortality, one’s youth and virility… now they have Viagra, they’re humping away on their deathbeds. Hollywood is a perfect expansion of that idea that permeates our society.”

In addition to Lange’s feedback, prolific producer Brain Grazer weighed in on the debate Thursday. Grazer brought an optimistic point a view that there are workarounds to the gender and age gap, like that one he found for Jodie Foster in Disney’s 2005 thriller “Flightplan.”

“This feels like an unfair, illogical and prejudicial thing to do,” he told Wrap CEO and Editor-in-chief Sharon Waxman. “A 40-year-old woman, a 50-year-old woman… Meryl Streep today… they [all have] sex appeal. It’s just about chemistry of the couple.”