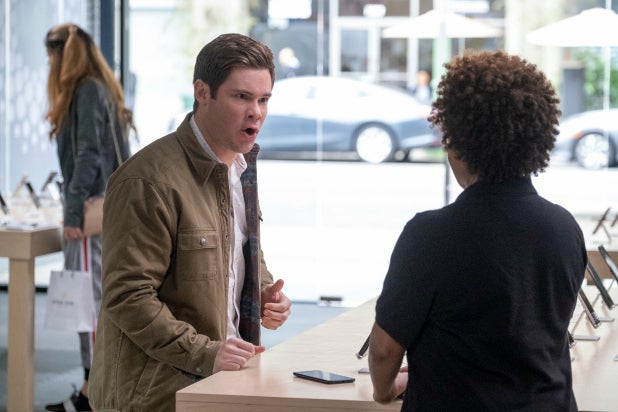 If, for whatever reason, you’re determined to see “Jexi,” you’ll want to arrive with a backup plan. Life is busy, so it’s important to use our time wisely. Perhaps you can mentally balance your checkbook, think through your upcoming schedule, or finally memorize the alphabet backwards. I came up with a long list of all the worthy filmmakers who’ve been unable to make a second movie, or had to struggle for years just to get their first one onscreen.

Although this wasteful effort from the “Bad Moms” team is uninspired in almost every regard, it does advance cinema in a single way: writers-directors Jon Lucas and Scott Moore have figured out how to modernize one of the most traditional and apparently still essential Hollywood tropes: the Crazy Bitch. They’ve even managed to cut out the middle(wo)man, no longer requiring the services of a flesh-and-blood actress to play this depressing fallback of a role.

Granted, Rose Byrne has been hired to do their dirty work. But since she voices the titular virtual assistant, she never had to show up on set and, to her great benefit, no one will even know it’s her unless they stay for the credits. (The movie was not screened for critics in advance, and the few other people in my theater left swiftly and silently as it ended.)

Also Read: Netflix's 'Green Eggs and Ham': Adam Devine to Voice Sam I Am, Michael Douglas Set as Guy Am I

Adam Devine (“The Righteous Gemstones”) plays Phil, a dullard who works for a Buzzfeed-type startup in San Francisco. Isolated and insecure, he spends his days generating click lists along the lines of “Cats that Look Like Ryan Gosling”. As soon as his work is done, he goes back home to scroll through other people’s social media profiles, eating Chinese take-out while assuming everybody else has it better.

There’s an interesting, if obvious, 21st century germ of an idea here. And when Phil’s phone breaks, you would be forgiven for assuming we’re heading down that path.

Nope! Phil just gets another phone, which turns out to house the aforementioned nutcase. As soon as he turns it on, the operating system, called Jexi, begins taking over his life. In Siri fashion, she’s supposed to serve as a techno-assistant. Instead she begins as a filthy-mouthed bully and quickly shifts into jealous-shrew mode. Before long, the stalker in his pocket guides Phil into life-threatening traffic, empties his bank account, publicly humiliates him, and demands that they, um, get intimate. (There’s a lot of plugging and unplugging of her charger.)

Watch Video: Tiffany Haddish and Rose Byrne Square Off Against Salma Hayek in 'Like a Boss' Trailer

There is no explanation for any of this, nor for the fact that Phil doesn’t just get an iPhone (although then we’d have had to sit through some sort of virtual Jexi-Siri catfight). Lucas and Moore seem to believe Jexi’s lines are hilarious, since they require us both to hear them and to see them written out on Phil’s screen. But there isn’t a single witticism among her running slew of angry threats and insults.

It’s hard to imagine how a premise this misguided could have been improved. But the right lead might have made it watchable. Devine plays Phil like a particularly put-upon Jason Bateman character, emphasizing the haplessness while omitting the appeal. The supporting actors do a little better in generating some energy, with Peña working overtime to find humor in a dimly obvious role. (Wanda Sykes shows up as the phone saleswoman, but she looks appropriately disinterested.)

San Francisco is shot well by experienced cinematographer Ben Kutchins (“Photograph”), at least. But really, the only saving grace is the charming Shipp, who’s good enough to make us wish the movie were about Cate, instead. Unfortunately, there is not one moment when we believe, or even hope, that she would fall for Phil.

The good news is, the movie about a guy’s relationship to his OS has already been made, and it happens to be a modern masterpiece. Ask Siri to open “Her” — it’s right there on Netflix — and delete this pretender altogether.