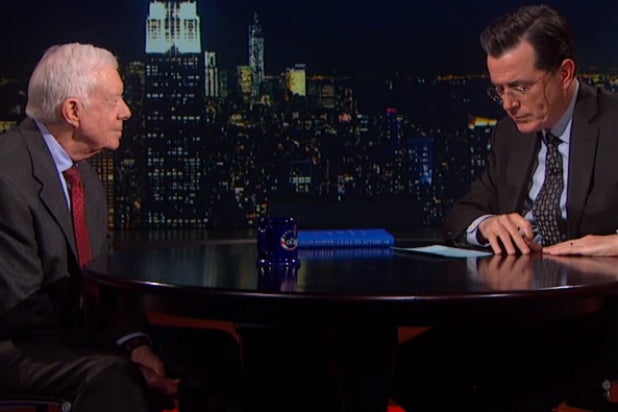 Former President Jimmy Carter will become Catholic if two things happen: First, if Pope Francis stays in office. Secondly, if a female priest asks him to join her church.

Carter guested on Tuesday’s “Colbert Report” to promote his 28th book, “A Call to Action: Women, Religion, Violence and Power.” The liberal former Commander-in-Chief and the conservative Comedy Central character duked it out over a number of issues mentioned in the book’s subtitle.

While both are Christian, they are divided among the denominations.

“Our freedom of religion allows me to interpret the Bible exactly how it fits my world view already,” Colbert said to Carter.

“Yeah, I noticed that on your show,” he fired back.

On that note, the topic sort of turned to institutionalized slavery.

“Slavery’s a worse problem now than it ever was in the 19th century,” Carter said, referring to the international sex trade.

Finally, Carter discussed his recently publicized fear of NSA spying. He won’t use email even though the government insisted that they’re not monitoring the former President’s activity.