Palin is in NYC for her libel lawsuit against the New York Times, and although the trial was set to begin Monday, it was put on hold following Palin’ test results, which were revealed by the judge in the case. Since then, she’s been filmed eating out in the city.

Here’s how the “Jimmy Kimmel Live” host addressed the news: “Sarah Palin, you remember her? She has COVID for a second time now. The unmasked singer is in New York City, appearing in court. She has a defamation suit against the New York Times. Wait, 12 years ago she couldn’t name a newspaper, now she’s suing one.” 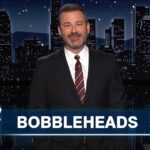 He continued: “So the trial was supposed to start this week but it had to be pushed when Sarah Palin, who is famously unvaccinated, tested positive again on Monday. You know, in New York, you’re supposed to isolate for five days after a positive test, but darn it, that’s not how [the] Alaska top hockey mom does it. She plays by her own rules. So the other night she caught some flack for eating indoors at a restaurant, despite the fact you’re supposed to show proof of vaccination to get in and she doesn’t have that.”

Kimmel then showed footage of Palin eating in a restaurant, and joked, “There’s Typhoid Mary having some linguini or something.”

As he wrapped up his bit, Kimmel pointed to the plethora of eating establishments one can get on delivery in the city.

“What’s she  supposed to do, sit in her hotel room and order from any of the 20,000 restaurants in New York City?” 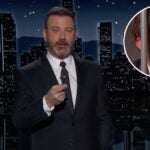