OK, I just have to ask: Is there any film genre more impoverished than romantic comedy?

Or maybe I should take it one step further, and pose a different question: Are our romantic fantasies really so threadbare that a movie like “The Back-Up Plan” qualifies as effective escapism?

Maybe so. Maybe it’s enough, in our era of downsized expectations, to settle for an attractive but pointless chain of contrivances, to embrace a love story simply because the people are pretty, the jokes familiar and the outcome preordained.

Maybe, in a time of political upheaval and diminished expectations, there’s something comforting about a genre that never campaigns on a platform of change.

I don’t think so. 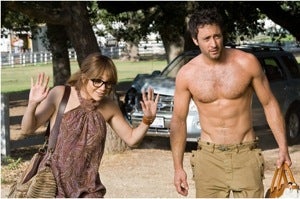 I think movies like “The Back-up Plan” have run smack into the law of diminishing returns. They relentlessly embrace an obsolete model while a new breed of rom-com – “(500) Days of Summer,” “Greenberg,” even the micro-budgeted charmer “Breaking Upwards” – is quietly showing that there’s a better way.

Boy doesn’t always have to get girl — and once in a while something should happen that you hadn’t seen coming for the past 40 minutes.

But, no, “The Back-Up Plan” isn’t interested in being a 21st Century rom-com. It proudly sends Jennifer Lopez down the path that’s been worn shiny and smooth by Julia Roberts and Meg Ryan and Sandra Bullock and Katherine Heigl and oh so very many others.

So it gives J.Lo her fabulous wardrobe, her lack of money worries (she’s got some put away, you understand), and her dreamy, immaculately bestubbled partner, Alex O’Loughlin. They meet cute, they don’t like each other, they flirt a little, they have a food fight and fall madly in love in about the time it takes to dry off, she gets crazy and drives him away through some escalating misunderstandings, and then …

(And if you think that paragraph deserved a Spoiler Alert, then you probably haven’t seen a rom-com since “Annie Hall.”)

At any rate, “The Back-Up Plan” more or less encapsulates the state of the major-studio rom-com, which is a sorry state indeed: it’s pretty people doing predictable, silly things, to the accompaniment of some thuddingly hamfisted pop songs and a running commentary from the obligatory Cynical Best Friend ™.

I suppose you could say that producer-turned-director Alan Poul’s film makes some halfhearted attempts to twist the genre, starting with the Lopez character’s first-act artificial insemination; it’s upping the ante a bit when your leading lady’s Mr. Right Checklist includes the usual factors – hunky, caring, creative job – and then adds “wants to be the father to my kids.”

But even that doesn’t really feel terribly new – at least not after “Knocked Up,” which had the advantage of being a heck of a lot ruder and a hell of a lot funnier, maybe because it wasn’t saddled with quite so many mainstream rom-com clichés.

And, you know, a comic childbirth sequence is much easier to embrace when it’s the dweeby friend who’s horrified by the biology lesson (i.e., Jay Baruchel in “Knocked Up”) than the mom-to-be.

Then again, each of the ”Back-Up Plan” slapstick sequences, whether a tug-of-war with a dog over a home-pregnancy kit or a dinner date that ends in a fiery mess, is so forced as to be almost unendurable.

This heap of contrivances and improbabilities, performed with vigor but without much sparkle, is familiar in a tiresome way, and tiresome in a familiar way: we’ve seen variations in “The Bounty Hunter,” and “Leap Year,” and “The Ugly Truth” … and let’s face it, any regular moviegoer can add to that list without breaking a sweat.

These days, it’s the rare mainstream rom-com that doesn’t just seem crashingly unimaginative and overinflated next to the smaller, quirkier, more touching likes of “(500) Days of Summer” or “Juno” or “Once” or even “Lars and the Real Girl.”

Maybe those films show how a romantic comedy can reflect the times: not by throwing up its hands and trotting out all the old standbys, but by downsizing those love-story tropes into something a little odder and weirder.

Still, there is one area in which I just have to tip my hat to “The Back-Up Plan.” Forget about making its dream guy an architect or its leading lady a chef – this movie is the ultimate when it comes to politically correct occupations for its main characters.

For starters, she owns a pet store – which she bought so that she could end the previous owner’s policy of buying from puppy mills. He, meanwhile, owns a farm, sells homemade cheese at a farmers market and dreams of opening a restaurant that serves only organic, locally grown food.

I mean, I’m about as liberal as they come, but this sounds like a couple that’d prepare an environmental impact report before deciding which kind of diapers to use.