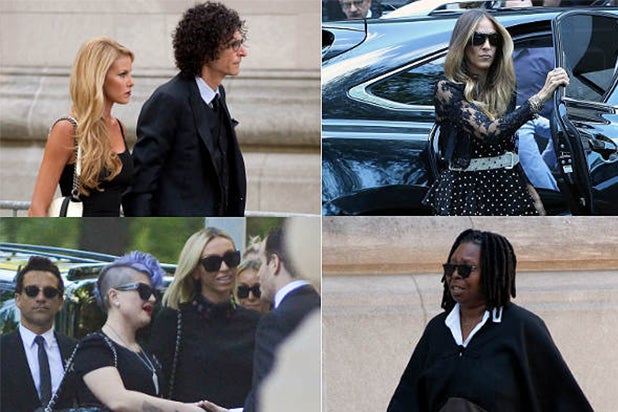 Joan Rivers received a send-off worthy of a Hollywood legend.

Howard Stern delivered the eulogy Sunday at New York’s Temple Emanu-El, as some of the biggest names in television, theater and fashion gathered to say goodbye to the 81-year-old comedienne.

Rivers’ daughter, Melissa, read a heartfelt letter to her mother and told everyone she appreciated their support.

After the service, tweeted, “ given a truly funny, truly loving send off by folks who loved her, funny & deeply moving, much like her.”

According to the Associated Press, three of Rivers’ famous lines were printed on the funeral program: “Can we talk?” ”Who are you wearing?” and “Because I’m a funny person.”

The celebrity-filled send-off, complete with a red carpet, was exactly what Rivers would have wanted. In her book “I Hate Everyone … Starting With Me,” the comedienne said she wanted her funeral to be “a huge showbiz affair with lights, cameras, action” and “Hollywood all the way.”

Rivers died Thursday following complications from throat surgery. She was rushed to Mount Sinai Hospital in New York on Aug. 28 and had been on life support.

An autopsy on the comedy legend has been completed, but the results did not yield a firm cause or manner of death, a spokeswoman for the New York Medical Examiner’s Office told TheWrap on Friday.