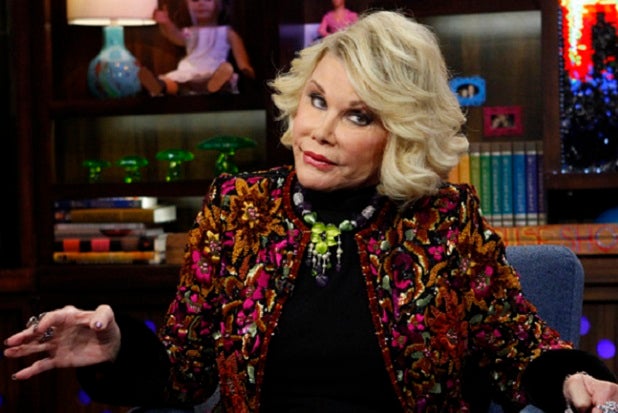 Joan Rivers died at age 81 on Sept. 4, 2015, leaving behind a long career filled with some of the funniest and most biting one-liners in comedy history.

Rivers made her name across stand-up stages, on late night television and E!’s “Fashion Police,” which was her most recent regular gig, and through it all she never lost her quick wit. Some of her favorite comedy topics included taking shots at celebrities and her even own family — but usually the butt of Rivers’ jokes was Joan herself.

Below are 16 of her very best quips from decades of entertaining and insulting.

“No more Botox for me. Betty Whites’ bowels move more than my face.”

“My vagina is like Newark. Men know it is there but they don’t want to visit.”

“It’s like herpes, you either have it or you don’t.”

“My daughter and I are very close, we speak every single day and I call her every day and I say the same thing, ‘Pick up, I know you’re there.'”

“I have a million dollar figure … but it’s all loose change.”

“I was getting dressed and a peeping Tom looked in the window, took a look and pulled down the shade.”

“If you don’t want gays in the military, make the uniforms ugly.”

“The only way I can get a man to touch me at this age is plastic surgery.”

On Elizabeth Taylor: “Is she fat? … Her favorite food is seconds.”

“I told my mother-in-law that my house was her house, and she said, ‘Get the hell off my property.'”

On Marie Osmond: “She’s so pure, Moses couldn’t even part her knees.”

“Bo Derek turned down the role of Helen Keller because she couldn’t remember the lines.”

“All I ever heard when I was a kid was, ‘Why can’t you be more like your cousin Sheila?’ And Sheila had died at birth.”

“You know why I feel older? I went to buy sexy underwear and they automatically gift wrapped it.”

“When I was born, my mother asked the doctor, ‘Will she live?’ He said: ‘Only if you take your foot off her throat.'”

“The whole Michael Jackson thing was my fault. I told him to date only twenty-eight year olds. Who knew he would find 20 of them?”