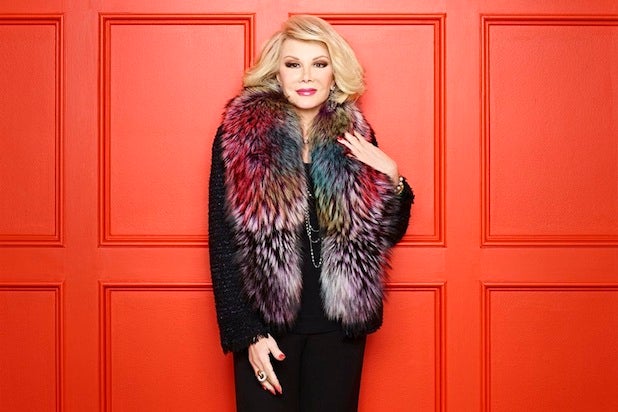 Joan Rivers, the sharp-tongued entertainer who opened doors for women in comedy, has died at age 81.

Her daughter Melissa released a statement on Thursday afternoon announcing the legendary comedienne had died. “It is with great sadness that I announce the death of my mother, . She passed peacefully at 1:17pm surrounded by family and close friends,” the statement said.

Rivers, who most recently co-hosted E!’s “Fashion Police,” was rushed to Mount Sinai Hospital in New York on Aug. 28, after she stopped breathing while undergoing throat surgery. She was later placed in a medically-induced coma and had been on life support.

E! released a statement on Thursday saying, “E! and NBCUniversal send our deepest condolences to Melissa, Cooper and her entire extended family on this incredibly sad day. For decades Joan has made people laugh, shattered glass ceilings and revolutionized comedy. She was unapologetic and fiercely dedicated to entertaining all of us and has left an indelible mark on the people that worked with her and on her legions of fans.”

Born Joan Alexandra Molinsky in Brooklyn in 1933, Rivers was the daughter of Russian immigrants Meyer and Beatrice Molinsky. She graduated Phi Beta Kappa from Barnard College in 1954 with a Bachelor of Arts degree in English literature.

The following year, she married first husband James Sanger. But the relationship was short-lived, and the couple had the marriage annulled six months later. Rivers’ second marriage to film and television producer Edgar Rosenberg lasted 23 years, until he committed suicide in 1987.

Rivers broke into the spotlight with a 1965 guest appearance on “The Tonight Show.” Though she would go on to frequently fill in for Johnny Carson, Rivers was banned from the late-night show after she left her permanent guest-host position to launch a competing show on Fox.

While her Fox program, “The Late Show Starring ,” was short-lived, her “Tonight Show” ban would last for more than two decades. Rivers returned to the “Tonight Show” again earlier this year, briefly appearing with new host on his first episode.

During her decades-long career, Rivers would often turn her abrasive style of humor on herself, frequently joking about her appearance and plastic surgery.

“I’ve had so much plastic surgery, when I die they will donate my body to Tupperware,” Rivers once wisecracked.

Her second husband, Edgar Rosenberg, also factored into her barbs. But tragedy struck the couple in 1987 when Rosenberg committed suicide. He was weighed down by health issues and suffered a heart attack in 1984. But Rosenberg also grappled with emotional issues and had been depressed after Rivers was fired from her Fox talk show, which Rosenberg produced.

“He bottled everything up,” Rivers told People, “bottled it up and killed himself at 62.” The couple had one child, daughter Melissa Warburg Rosenberg, who was born in 1968.

Rivers received numerous Daytime Emmy nominations, winning in 1990 in the Outstanding Talk/Service Show Host category for “The Show,” which aired from 1989-1993.

Her other television credits include “The Show,” “Hollywood Squares,”  “Saturday Night Live,” “Nip/Tuck” and “The Ed Sullivan Show.” She and Melissa also co-starred on the WE tv reality series “Joan & Melissa: Joan Knows Best,” and were longtime co-hosts of E!’s Oscars pre-awards coverage, while the elder Rivers went on to host red-carpet events for TV Guide Channel. She also regularly poked fun of the stars and their red carpet attire on E!’s “Fashion Police,” which Melissa executive produces.

Rivers had ties to the film industry as well. She co-wrote and directed a feature film in the 1970s — highly groundbreaking for a woman in Hollywood at that time. Titled “Rabbit Test,” the 1978  comedy centered on a pregnant man. It starred Billy Crystal in his very first feature film, and Doris Roberts played his mother.

In 2009, Joan and Melissa were contestants on the NBC reality competition show “Celebrity Apprentice.” Joan won by beating out poker champ Annie Duke.

In recent years, Rivers was criticized for joking about Grammy-winning singer Adele’s weight, as well as jokes about the Holocaust and the Ariel Castro kidnappings in Cleveland, Ohio.

When faced with criticism, Rivers was prone to dig her heels in. Called out by the Anti-Defamation League for her “vulgar and hideous” remarks about the Holocaust, Rivers replied, “This is the way I remind people about the Holocaust. I do it through humor.”

In July of this year, she made headlines again by walking out of an interview with CNN because she felt weekend anchor Fredricka Whitfield’s questions were a “negative” attack rather than a light-hearted chat about a comedy book. Rivers told TheWrap at the time, “She did not seem to understand we were talking about a comedy book and not the transcripts from the Nuremberg Trial. Every question was an accusatory one designed to put me on the defensive.”

Also read: Joan Rivers Is Not Sorry for CNN Walkout: Every Question Was Accusatory

Throughout her groundbreaking career, Rivers also branched out into writing, penning a dozen books, including the mock memoir “The Life and Hard Times of Heidi Abramowitz” and the books “Diary of a Mad Diva,” “Still Talking” and “Bouncing Back: I’ve Survived Everything … and I Mean Everything … and You Can Too!” As a recording artist, Rivers was nominated for a Grammy award for her comedy album, “What Becomes a Semi-Legend Most?”

Rivers also had a successful fashion and jewelry line called the Classics Collection, which is a top seller on television shopping channel QVC.

Rivers is survived by her daughter, Melissa and her grandson, Cooper.

Below is the statement on Rivers’ death that Melissa released through Katz Public Relations:

It is with great sadness that I announce the death of my mother, . She passed peacefully at 1:17 p.m. surrounded by family and close friends. My son and I would like to thank the doctors, nurses, and staff of Mount Sinai Hospital for the amazing care they provided for my mother.

Cooper and I have found ourselves humbled by the outpouring of love, support, and prayers we have received from around the world. They have been heard and appreciated.

My mother’s greatest joy in life was to make people laugh. Although that is difficult to do right now, I know her final wish would be that we return to laughing soon.