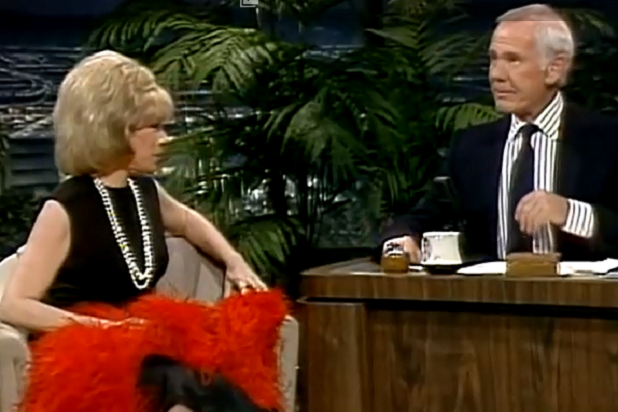 Joan Rivers, the tart-tongued comedienne who died Thursday at age 81, had a legendary, decades-long career, with much of it playing out on late-night television. A late-night host in her own right as well as a frequent guest-host on “The Tonight Show,” Rivers was often at her best in the wee hours.

In honor of the comedy legend, TheWrap presents a selection of Rivers’ best late-night moments.

Rivers was a frequent guest and guest-host on Johnny Carson’s “The Tonight Show,” starting with a breakthrough 1965 appearance. In 1986, Rivers once again appeared as a guest on the show, going full throw-back by dressing in the outfit she appeared in during her first appearance.

As a guest host on “The Tonight Show,” Rivers shined bright, as evidenced by this 1980s monologue. Turning her humor on herself, Rivers cracked wise about both the dress she was wearing and her marriage:  “I wore the dress last night to bed and I said to my husband Edgar, ‘Does this dress give you any ideas?’ And he said, ‘Yes, I’d like to see my girlfriend in it.'”

Rivers hosted her own late-night program, “The Late Show Starring Joan Rivers,” which premiered on Fox in 1986. Though the offering was short-lived, lasting only until the next year, it started off with a bang. The premiere episode featured guests David Lee Roth, Pee-wee Herman, Elton John, Cher … and Rivers’ big, big, Reagan-era hair.

While promoting her book “I Hate Everyone … Starting With Me” on “Late Night With Jimmy Fallon,” Rivers was typically venomous. Targets included Octomom, whose vagina Rivers compared to a log flume ride, and Christina Aguilera, who Rivers dubbed “Fatso.”

Rivers was put in the hot seat with a 2009 Comedy Central roast. True to form, she gave as good as she got, chugging a drink and slapping presenter Kathy Griffin before shooting a zinger in Griffin’s direction.

Rivers’ falling out with Johnny Carson led to a decades-long ban from “The Tonight Show,” Rivers returned to her old stomping grounds earlier this year, briefly appearing on the show alongside new host Jimmy Fallon.

In July, after Rivers had made headlines by walking out on a CNN interview, she appeared on “Late Show With David Letterman,” where she got a taste of her own medicine.