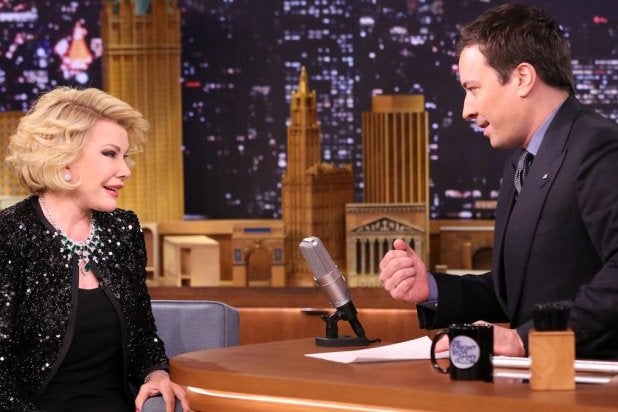 Joan Rivers was a tour de force throughout her long career, but one of the places she made the biggest mark was in late night television.

A frequent guest host of “The Tonight Show,” she became the first woman to headline her own late night talk show on a broadcast network on the then-new Fox network in 1986.

After her passing on Thursday, many of today’s late night hosts paid tribute. David Letterman remembered Rivers’ courage. Letterman’s “Late Show” tapes in the Ed Sullivan Theater, where “The Ed Sullivan Show” was broadcast from and where Rivers was a frequent guest of Sullivan’s show through the 1960s.

“Here’s a woman, a real pioneer for other women looking for careers in stand-up comedy,” he said. “And talk about guts — she would come out here and sit in this chair and say some things that were unbelievable, just where you would have to swallow pretty hard … but it was hilarious … the force of her comedy was overpowering.”

Conan O’Brien, who briefly hosted “The Tonight Show” before landing on TBS, spoke about the landmark performer with guest Chris Hardwick, recalling those times she stepped in for Johnny Carson on “The Tonight Show.”

“When she did, it was an event. Everybody in the country would talk about it the next day,” he said.

Over at the NBC late night institution Rivers guest hosted for years, current host Jimmy Fallon also gave an emotional tribute. “She’s one of the funniest people in the world ever,” he said. “She would come out and say what you were thinking but wouldn’t say it. You would stop, but she wouldn’t stop. A lot of people thought her humor was mean, but she just wanted to make everyone laugh. And she could take a joke just as easily as she could dish it out.”

Rivers had a notorious falling out with Carson after she accepted her own talk show on the fledgling Fox network in 1986. He never talked to her again, and she didn’t return to “The Tonight Show” after that until shortly after Fallon took over the helm.

Jimmy Kimmel talked about Rivers during his opening monologue over on ABC. “Besides being a pioneer for women in comedy, for everyone in comedy, Joan was a very lucky person because she loved her job so much, she never wanted to stop,” he said. “And she didn’t have to stop because she was still great at it.”

On “The Late Late Show,” Craig Ferguson paid tribute to Rivers in her language, by cracking a joke. “I just hope that when Joan meets the man upstairs he is wearing something she can insult,” he said.