The six-part series, written and produced by Harry and Jack Williams (“Liar,” “The Missing”), begins as the story of an abused woman as she starts to find the strength to plot an escape from her husband, Olivier (“Game of Thrones” alum Michiel Huisman). It is also, though, a psychological thriller that involves surprising twists and turns that begin when Angela meets Ed (Samuel Adewunmi), a private investigator who shows up at her door after a brief meeting at a pub, to tell Angela her husband isn’t who she thinks he is. And things only get more complicated from there.

Froggatt, who worked with “Angela Black” executive producers/writers Harry and Jack Williams on “Liar,” was aware the role she was being offered wasn’t going to be straightforward storytelling after reading the material they sent over.

“I love their writing. In my opinion, they write thriller on TV better than anyone,” Froggatt told TheWrap in a recent interview. “They said, ‘Oh, we’ve written something and we’d love you to read it and take a look at the role of Angela and you know, it’s yours if you’d like to play it.’ So I was like, ‘Oh, wow, amazing. Thank you.’ So I was super excited to get the script. They sent me the first three episodes and I literally sat and read all three back to back in one sitting. I couldn’t put it down. And then I was like, ‘OK, this is something I’m definitely not going to say no to. I can’t say no.” 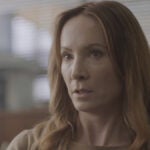 Froggatt said the role, which follows Angela as she becomes something of a detective, trying to figure out more about her husband and what is really going on, drew her in for a number of reasons.

“Partly because it was just such a brilliantly entertaining, edge-of-your seat psychological thriller, but also very sort of Hitchcockian and very subtle in the way the story starts off,” she said. “Also, character wise, what really interested me is that we meet Angela at a point in her life where she’s really lost her sense of self and she’s lost her voice. … She lost her, yeah, her self as a person really, her self confidence, everything,” Froggatt said. “She’s sort of broken down by life and then she goes on such a rollercoaster journey that she almost has to break down further before she can start to sort of rebuild herself and therefore rebuild her confidence in her own mind, in her instincts, in her intelligence and really decipher what’s really going on in this story that we tell.”

The story requires tense scenes between Angela and Olivier as they live together as he apologizes following his latest abusive incident, and as she starts to suspect – due to her interactions with private eye Ed – that her husband may have nefarious intentions. Huisman had to go finish filming for HBO Max’s “The Flight Attendant” Season 1 following COVID lockdowns as “Angela Black” began shooting, so the production had to start without him.

“We actually had to film five weeks before Michiel – before we knew we definitely had Michiel,” Froggatt said.

But the actor arrived in the U.K., and immediately got to work to build the tension opposite Froggatt.

“We just had to get to grips with it really quickly. Michiel was so passionate about playing Olivier and about the story and about building the psychology of their relationship. And we just did it,” she said. 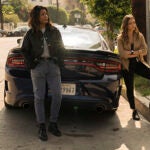 As the show does deal with domestic abuse, Froggatt said she did a lot of research, including reading books from Mandy Thomas, Katie Piper and Melanie B., and worked with a charitable organization that supports women.

“Women’s Aid is a charity – a British charity – to support victims of domestic abuse. And they were very involved with our show from the beginning. So they advised Jack and Harry, our writers, during [the creation of the show] and stages of writing. Then obviously, when I came on board, they did the same with me,” Froggatt said, noting they helped her with research material and allowed her to speak to some of the counselors.

All six episodes of “Angela Black” are available beginning Feb. 7 on-demand, free and without ads on Spectrum.