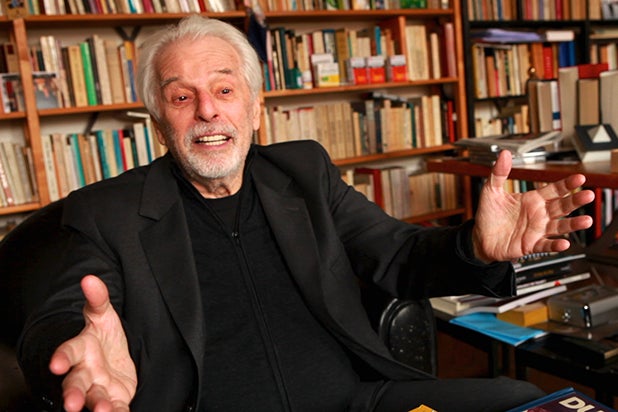 Like most movies about moviemaking, “Jodorowsky’s Dune” is art-affirming – a celebration of the pursuit of cinematic greatness in an industry, or even a world, that doesn’t understand or isn’t ready for it.

The advantage Frank Pavich’s documentary has over its counterparts, however, is that the truth behind Jodorowsky’s adaptation of Frank Herbert’s iconic novel is genuinely stranger than fiction, a tapestry of before-their-time ideas, cartoonish star wattage and just enough genius-level insanity to almost – almost – pull it off.

A riveting chronicle of “the greatest movie never made” and a great tribute to a golden age of auteur filmmaking, “Jodorowsky’s Dune” is catnip for cinephiles that doubles as a showcase for a kind of batshit creativity that was all but completely drummed out of Hollywood after the 1970s.

Featuring interviews with Jodorowsky himself, “Alien” concept artist Jean “Moebius” Giraud and many others, the film explores the history of the “El Topo” director’s efforts to adapt Herbert’s book, which many considered “unfilmable” – and given the success of subsequent tries, many still do. Recruiting a dream team of some of the greatest artistic talents in the world, Jodorowsky scared up the resources to make the film and assembled an international cast that included Mick Jagger, Orson Welles and Salvador Dali, only to find himself stymied by the straitlaced appetites of the studio system.

In a lot of ways, it’s totally understandable why Jodorowsky’s film never happened; no studio was ever going to bankroll a 14-hour movie in which, among many other things, a sperm navigates its way through a woman’s vagina to conceive mankind’s messiah. But the collective enthusiasm of Jodorowsky and his collaborators makes you believe that it could have happened, and more importantly, it would have been brilliant. Crazy, indisputably, but brilliant.

Supplementing the tale of the film’s development are interviews with critics like Devin Faraci and Drew McWeeny and filmmakers like Richard Stanley (“Hardware”) and Nicolas Winding Refn (“Drive”). They gamely enhance the project’s legend, not only by championing its bizarre imagination but placing it in historical context where even incomplete, it influenced generations of directors, some perhaps without them even knowing it.

Jodorowsky’s passion for the project, even now, is positively infectious, even when remembering the two years of six-days-a-week physical preparation that the filmmaker subjected his son Brontis to after casting him as Paul Atreides. Like all great artistic pursuits, the film demanded a certain kind of obsession from its makers, and decades later, their memories of failed ambition have a cheerful sort of resignation, if only because they all felt they were part of something truly special.

Evidence of the film’s impact on subsequent films feels slightly anecdotal – “Dune” certainly employed some of Hollywood’s best and brightest, but not all of them by a long shot, and it’s possible a few not involved came up with similar ideas on their own. But as a reminder that filmmaking is a collaborative art, not one driven by committee, “Jodorowsky’s Dune” is a tribute to the idiosyncrasies of truly gifted minds, and a glorious reminder for filmmakers to dream big – whether or not they all come true.