Joe Rogan released a 10-minute video defending himself Sunday as pressure mounts against him and Spotify over his podcast’s COVID-19 content. He said those who don’t listen to his hit podcast, “The Joe Rogan Experience,” might have “a distorted perception” of him “based on sound bites or based on headlines of articles that are disparaging.”

“The problem that I have with misinformation, especially today, is that many of the things that we thought of as misinformation just a short while ago are now accepted as fact,” said Rogan, whose recent episodes on COVID-19 regulations and vaccines caused Neil Young to pull his music from Spotify in protest. Joni Mitchell and Nils Lofgren threatened to pull theirs, too, and Spotify announced this weekend that a disclaimer will now air before Rogan’s show. 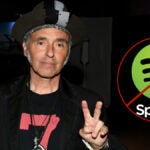 “For instance,” Rogan said, “eight months ago, if you said, ‘If you get vaccinated, you could still catch COVID and you could still spread COVID, you would be removed from social media.”

He defended his choice to have vaccine skeptics like Dr. Robert Malone and Dr. Peter McCullough on the “Experience,” explaining that they have opinions “that differ from the mainstream narrative.” He said he wants to hear their opinions and let his listeners hear them, too, but “because of that, those episodes were labeled as dangerous.”

“If there’s anything that I’ve done that I could do better, it’s having more experts with differing opinions right after I have the controversial ones. I would most certainly be open to doing that. And I would like to talk to some people who have differing opinions on the podcasts in the future. I do all the scheduling myself and I don’t always get it right,” he admitted.

Rogan said he knows he “absolutely” gets things wrong and engages in conversations where he has “no idea what we’re talking about.” He promised to be more responsible about that in the future and said he agrees with his platform’s decision to add the disclaimer. He also said he is a fan of Young and Mitchell.