Another day, another anti-vax comment from the Joe Rogan Experience.

On a recent episode of his podcast, Joe Rogan and guest Meghan Murphy discussed what they feel are overreaching and contradictory pandemic regulations.

Rogan explained how he takes issue with New York City Mayor Bill de Blasio for requiring New Yorkers to provide proof of vaccination when dining indoors or attending a variety of indoor events and spaces. 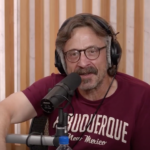 The podcaster also noted how de Blasio had ruled that last summer’s Black Lives Matter protests were exempt from the ban on large events and gatherings.

“That’s not how rights work!” Murphy exclaimed, to which Rogan added, “Especially in America.”

Murphy, a Canadian writer who was banned from Twitter for comments many deemed transphobic, expressed her concerns over Prime Minister of Canada Justin Trudeau making similar decisions.

“This BLM protest that happened during COVID is fine, but this anti-lockdown protest is illegal, essentially,” Murphy said of Trudeau’s pandemic regulations. “And people don’t see why that’s a problem and it’s crazy to me and it’s super scary to me.”

Rogan joins a growing number of entertainers making headlines for opting whether or not to require proof of vaccination against COVID-19 at their shows as the Delta variant continues to wreak havoc across the country.

However, Rogan’s track record of spreading misinformation related to the COVID vaccine (namely that “healthy” people don’t need it) is well-documented, despite the former “Fear Factor” host’s insistence that he is not anti-vax, actually.