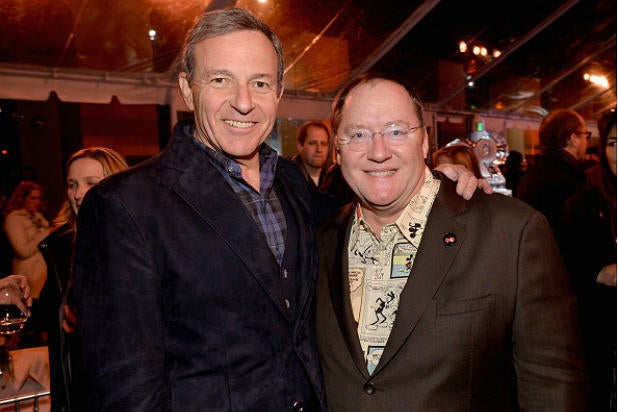 John Lasseter is such a stickler for detail that Tuesday night’s party to celebrate the 90th anniversary of Walt Disney Animation, for which the Pixar co-founder now serves as Chief Creative Officer, took place outdoors on a Los Angeles night cold enough to fit in Disney’s new animated hit, “Frozen.”

Or maybe Lasseter didn’t plan for the weather – maybe things just worked out that way, the way the animated-feature awards race may work out for Lasseter and Disney this year.

With “Frozen” winning rave reviews and overtaking “The Hunger Games: Catching Fire” to grab the No. 1 spot at the box office over the weekend, the new Disney film looks like the odds-on favorite to claim the Oscar for Best Animated Feature – something that no Disney film has ever done, despite the long and storied history that was celebrated on the studio lot on Tuesday night.

Of course, the animated feature category didn’t exist until 2002, which means that the long roster of Disney classics – from “Snow White and the Seven Dwarfs,” “Bambi,” “Cinderella,” “Dumbo” and “101 Dalmations” through “The Little Mermaid,” “Beauty and the Beast” and “The Lion King” – never had a chance to win, something the studio probably would have done a good 15 to 20 times over the decades.

But the Oscar would nonetheless be a nice capper for the studio that for a while was overshadowed by the upstart Pixar — so an anniversary party also turned into a nifty campaign opportunity for the new film, which screened on the lot prior to the festivities.

“Animation really has been the heart and soul of the company,” Disney chairman Bob Iger (pictured above with Lasseter) said at the party, adding that “Frozen” is a key part of the studio’s identity: “I cannot say enough about how important it is to the company.”

Iger also credited the resurgence of Disney animation to the 2006 purchase of Pixar, which has won seven of the 11 animated-feature Oscars. When Disney bought Pixar outright, Lasseter and Ed Catmull came over to run the parent company’s animation efforts, which has resulted in films like “The Princess and the Frog,” “Wreck-It Ralph” and “Frozen.”

On Tuesday, Lasseter paid tribute to “one of the greatest legacies in the entertainment business.” Disney’s animated films, he said, were “why I chose this life’s work,” and why he challenged all of Disney’s animators to push.

“When I came in here, I went to all the artists and said, ‘I want you to aim high -far higher than you think that you can reach, because Walt Disney’s name is going to be at the beginning of your films.'”

He also introduced a number of “Disney legends,” including from the voices of Donald Duck, Minnie Mouse and Goofy, animators who had worked on “Sleeping Beauty,” “The Jungle Book,” “The Lion King” and “Wreck-It Ralph,” songwriter Richard Sherman (“The Jungle Book,” “Mary Poppins”) and Disney vets Milton Quon and Ruthie Thompson, who are 100 and 103 years old, respectively.

After the speeches and introductions, “Frozen” co-director Chris Buck told TheWrap that he’d returned to the studio where he once made to work with his Cal Arts classmate Lasseter.

“I know it sounds like a cliché to say this, but there is something of Walt Disney in John,” said Buck. “He really is the true successor to Walt.”