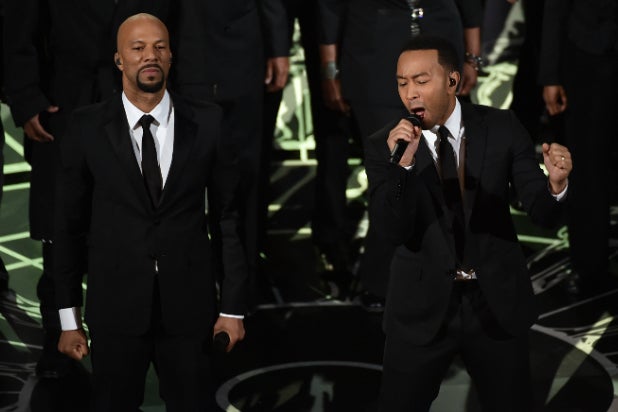 John Legend and Common have more to celebrate than taking home an Oscar each for Best Original Song after Sunday’s ceremony.

The gospel-inspired “Glory,” as well as the whole soundtrack for “Selma,” enjoyed prime spots on iTunes and Amazon Monday following the Academy Award win, and streams of the single increased 240 percent on Spotify and 250 percent on RDIO (see infographic below) after the moving performance.

If the trend among Best Song winners of the past five years continues, the song can expect a sales spike this week.

“Glory” is the third most downloaded song on iTunes and stands at No. 10 on Amazon’s Top 100 chart, making it the only single in the top 10. Likewise, the full album is the only soundtrack in the top 10 paid albums, beating out the single at No. 9.

Part of this sales boost may be explained by increased accessibility to the material and awareness of the songs themselves. Music discovery app Shazam — which “listens” to songs using a device’s microphone and tells the user what’s playing — said Monday that “Glory” was one of the least searched songs performed on Sunday’s Oscars telecast.

Also Read: How ‘Selma’ Oscar Winners Common and John Legend Use Fame as a Platform

That means users are already quite aware of the song and don’t need to look it up, compared to most-searched “Lost Stars,” Adam Levine‘s original song from “Begin Again.”

Every year since 2010, the winner for Best Original Song saw its sales grow from the week before the Oscars to the week after. Adele’s theme for the James Bond film “Skyfall” spiked nearly 300 percent after winning in 2012, according to Billboard. The already wildly popular “Let It Go” from Disney’s “Frozen” rose 32 percent after winning last year.

Even “The Muppets” ditty “Man or Muppet” saw a boost, from below 1000 units sold to a peak of 5000 during and after Oscars week.