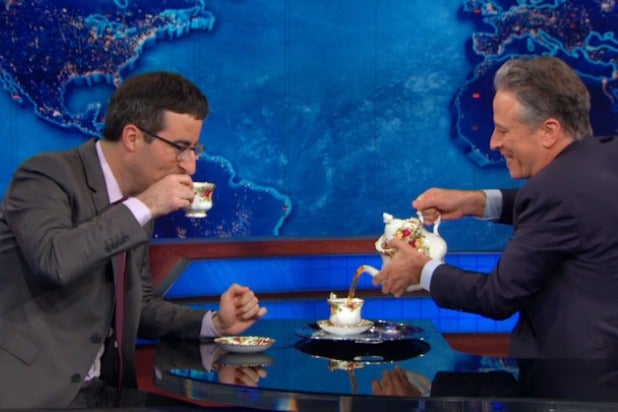 John Oliver returned to “The Daily Show” Thursday to have tea with former boss Jon Stewart and boast about all the perks of working for HBO.

Oliver, who filled in as the host of “The Daily Show” last summer, makes his debut on HBO’s “Last Week Tonight” on Sunday. He returned to Stewart’s show one night after Stephen Colbert came back to break the news to Stewart that he’s leaving Comedy Central.

Oliver started off by mocking the British credentials of new “Daily Show” senior British correspondent Jessica Williams — “Jon, she’s from Southern California” — and then talked about his new, lighter schedule.

“I’m only doing one show a week now and you know what that means,” he said. “I get to go outdoors and see the — um –“

Also read: John Oliver Is Sickened by His Own ‘Horrible’ HBO Billboard (Video)

Oliver told Stewart that HBO lets its shows get away with anything — and played the opening of the “time is a flat circle” speech from “True Detective” to prove it.

Then he complained about “that weird bleeping sound” on Stewart’s show — and noted that on HBO he’s allowed to curse and be nude.

“I get it. HBO is a wonderland of expletives and a forest of dongs,” Stewart said.