Johnny Knoxville has spent two decades getting smacked by bulls, blasted with riot gear and knocked out by Butterbean. So entering the world of WWE is nothing to him.

On Sunday, Knoxville will join the Royal Rumble, WWE’s annual showdown where 30 wrestlers compete for a spot in the main event of Wrestlemania. The 50-year-old “Jackass” star is only the second celeb to take part after Drew Carey entered — and then quickly exited — the match back in 2003.

When talking to TheWrap about the match and his new movie, “Jackass Forever,” Knoxville was filled with the trademark bravado that he’s always used to build anticipation for the inevitable, painful pratfalls of his stunts. Just before getting body checked by an All-Pro NFL player, he told him, “Don’t hit me with your purse,” and now he’s more than happy to trash the entire WWE roster.

“I’ve seen these so-called ‘superstars.’ They don’t impress me. I’m gonna fly them all out of the ring like paper airplanes,” he boasted to TheWrap. “I’ve been flippin’ truck tires over my fence. They’re about the size of Brock Lesnar.”

“Jackass Forever,” which will hit theaters Feb. 4, is both Knoxville’s return to the MTV series that made him famous and his farewell to his career as a living crash dummy. Since testing pepper spray on himself for Big Brother magazine in 1998, Knoxville has led a troupe of prank-loving buddies around the world on a series of wild stunts for the “Jackass” TV series, three movies and several spinoffs from 2000 to 2013.

Now, “Jackass Forever” sees him reunite not only with many of his original mates but with a new crew of ne’er-do-wells, all of whom grew up watching the series and have way fewer concussions and broken bones than the original crew. Interestingly, the film arrives as Paramount and ViacomCBS have been plumming MTV’s history for potential revivals, reuniting the original cast of “The Real World,” while rebooting series like “Yo! MTV Raps,” “Road Rules” and “Unplugged” for release on Paramount+.

Could Paramount be preparing the “Jackass” newcomers to be the stars of their own streaming revival? Knoxville discussed that possibility along with his musical and comedic inspiration, the chemistry amongst the expanded “Jackass” cast, and the deep friendships that have given this goofy series its longevity. The interview has been lightly edited for clarity. 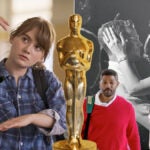 Also Read:
How the Oscar Race Stacks Up Now That the Guilds Have Spoken (Sorry, ‘Spider-Man’)

Back in 2006 when “Jackass Number Two” came out, your co-stars Steve-O and Chris Pontius got in a WWE ring and took quite a beating. Have you talked with them for any advice about taking bumps in the ring?

I haven’t asked them a single thing! I’m not taking advice from those two after they got destroyed by Umaga. It was hilarious, though. Umaga did his finish to Steve-O, and he just gets up and starts giggling. So Umaga gets back in there, and it’s just slam after slam after slam. He got a concussion from all that, but he’s very happy with the footage.

“Jackass” has hinged so much on the chemistry that you and your castmates spent years building, but in “Jackass Forever” you have six new members. How did you make sure they were the right fit? Are there chemistry reads for “Jackass”?

Well, the good thing was that we already knew most of them and got along with them on that level. Also, before we even agreed to shoot the movie, Spike Jonze suggested that we do a two-day test to not only test the new people but to test the old guys too, just to see what it felt like to be filming again after all these years and to see if we’d get all sweaty. We treated that whole test shoot like we were actually filming the movie, so it was trial by fire. But after an hour, we knew it was going to work. 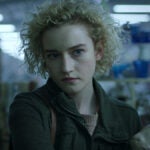 Did the newcomers have any ideas or input on the stunts for this film? And was there ever a point where the studio said you guys were going too far?

I think Zach [Holmes] came up with some. I think everyone did. Even though Jeff [Tremaine, director] and I come up with a lot of the ideas pretty much everyone adds onto it. It’s a real group process with the whole cast and crew getting involved. Fortunately, we didn’t get a lot of pushback, but there was one big stunt that we really wanted to do with Dave England that the studio told us would cost $8 million to insure. I don’t want to say what it is because I’m still hoping that one day we might be able to actually do it.

“Jackass Number Two” ended with you recreating the famous house collapse from Buster Keaton’s “Steamboat Bill Jr.” Was Keaton an influence for you when doing “Jackass,” and who else in your life or in films has influenced you?

By far, the biggest influence was my father. He just pranked his employees at his tire company constantly. And cartoons have also been a huge influence to the detriment of my body. You’ve seen me do all these Wile E. Coyote gags and I’ve kinda proved in “Jackass” that you can’t do in real life what you can do in cartoons.

But Keaton was also a big influence as well. You saw that gag at the end of the film, and I was really getting into Keaton at the time we shot “Jackass Number Two.” He really had an influence on everything we’ve done since then, as did Chaplin and Harold Lloyd and that entire era of silent comedy movies. 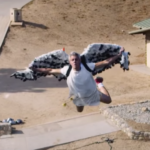 On the musical side, I know that Johnny Cash has also had a big impact on your life. His rendition of “We’ll Meet Again” is in the “Jackass Forever” trailer, and you played Cash in an episode of “Drunk History.” What is it about Cash that so resonates with you?

I actually wore Cash’s boots that I got at an auction when I played him in “Drunk History.” I’m pretty sure the first time I heard him was in my dad’s truck. He always played Waylon Jennings and Willie Nelson and Little Richard and a lot of Johnny Cash. Those were his big musical heroes. When I was with my mom, I could listen to whatever I wanted, but those were the artists that I always listened to when I was with my dad. So I’ve always had an affinity for Johnny Cash, not just because he’s made such immortal music that is so truthful, but just that every time I hear him he always reminds me of my dad.

The tagline in the trailer is “Forever friends, forever Jackasses.” Looking back, do you think it’s that strong bond you have that is the reason people still love “Jackass” after all these years?

Oh, absolutely. Not only has our friendship endured, but it has also gotten stronger because we have been through so much together. I’ve seen a bunch of other shows try all these stunts and pranks and a lot of them just don’t replicate that. I think people keep coming back not just because of the crazy stunts but because everyone brings their own personality to them that’s really unique to “Jackass.”

Now that you’re done with stunts, are you thinking about continuing to do things with the other “Jackass” guys in some other capacity?

We’ll have to see on that. I know the other guys really would like to do that because we had so much fun working on this movie, but who knows? I don’t know if this is the last “Jackass” or not. I’d be stepping aside if it goes on, but maybe the new guys can start a new series of “Jackass” and the old guys could come in now and then for a cameo. That could happen or it could not happen. The downside of being half-assed stuntmen is that we are not good planners.