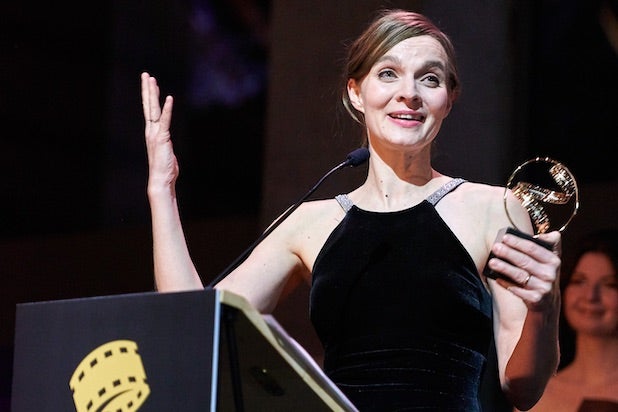 Society of Composers and Lyricists

Four months after winning an Emmy for her score to the miniseries “Chernobyl” and two days after taking home a Golden Globe for her music to “Joker,” composer Hildur Gudnadottir won new awards for both of those scores at the first annual SCL Awards, presented by the Society of Composers and Lyricists.

Although the SCL was formed in 1983 as an offshoot of previous organizations that had dated back to 1945, its efforts to promote the interests of composers and lyricists working in visual media did not include giving out awards until this year.

“What took you guys so long with the awards?” composer Bill Conti asked at the beginning of the show. “People who work in Hollywood, we need constant approval.”

Also Read: BAFTA Nominations Put '1917' in the Awards Spotlight Again - and 'Joker,' Too

The Icelandic composer Gudnadottir received that approval to the point where she was visibly embarrassed, winning for “Chernobyl” early in the crisp 90-minute ceremony and then receiving a second award at the end for “Joker.”

The first award of the night, which meant it was also the first award in the history of the SCL Awards, was won by Kathryn Bostic for her score to the independent documentary “Toni Morrison: The Pieces I Am.”

All five of the SCL’s nominated movie songs and four of its five scores in the Outstanding Original Score for a Studio Film category have made the Oscars’ music shortlists. One of the nominees in a category devoted to independent film, Alberto Iglesias’ score for “Pain and Glory,” was also shortlisted by the Academy.

“1917” composer Thomas Newman and director Sam Mendes were given a special Spirit of Collaboration Award. Newman’s score for the film was completed too late to qualify for a nomination in its category, but he and Mendes were honored for a collaboration that has also included “American Beauty,” “The Road to Perdition,” “Jarhead” and two James Bond movies, “Skyfall” and “Spectre.”

The ceremony took place at the Skirball Cultural Center in Los Angeles, and included performances from “Us” composer Michael Abels with the 38-piece SAG-AFTRA singers, violinist Philippe Quint and singer Dannielle D’Andrea, who was accompanied on a sultry version of the classic “Cry Me a River” by veteran saxophonist Gene Cipriano.

That song’s writer, Arthur Hamilton, was one of the presenters on the show, along with composers Bill Conti, Charles Bernstein and Hannah Parrott, among others.

To launch a new awards show for the first time, the SCL chose a day that had already included Producers Guild, Directors Guild and Visual Effects Society nominations in the morning and the end of Oscar nomination voting in the afternoon. But the show had a low-key, collegial feel that made it a welcome stop in an increasingly frantic awards season.

Also Read: Jerry Herman Remembered by Bernadette Peters, Harvey Fierstein and More: 'We Lost One of the Greats'

The nominees and winners:

Outstanding Original Song for Visual Media
Kristen Anderson-Lopez and Robert Lopez, “Into The Unknown” from “Frozen II”
Kathryn Bostic, “High Above the Water” from “Toni Morrison: The Pieces I Am”
Joshuah Brian Campbell and Cynthia Erivo, “Stand Up” from “Harriet” *WINNER
Justin Paul, Benj Pasek and Alan Menken, “Speechless” from “Aladdin”
Diane Warren, “I’m Standing With You” from “Breakthrough”