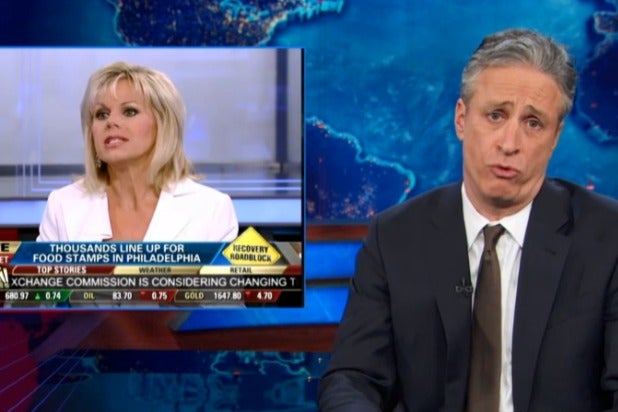 Fox News talking heads have a lot of problems with food stamps.

As Jon Stewart noted on Tuesday’s “Daily Show,” the network’s hosts and contributors, from Gretchen Carlson to Sean Hannity, have a long list of items people should not be able to buy with food stamps, from dog food to soda to poultry at Disneyland. Carlson said in one clip that you “hear stories” about people who use food stamps to draw money at Las Vegas casinos.

“Yes, you do hear all these stories – whether or not they’re true or indicative of widespread abuse,” said Stewart. “Not really the point here. Because you hear them. And as a reporter on a news network, it is your job to pass them along through your mouth hole. As your slogan says, ‘Fox News: We read the chain mails your grandma gets in her inbox out loud like they were true.'”

One recurring Fox News theme is that the poor are using food stamps to buy fresh seafood, from gourmet crab legs to organic salmon. Stewart said seafood “is apparently now considered the Mercedes of food.”

“What’s with the f—ing ish?” he asked. “We don’t want food stamp recipients eating junk. But we also don’t want them taking our nice human food. What’s the right mixture of quality and class-based shame poor people should aim for in their meal planning?”