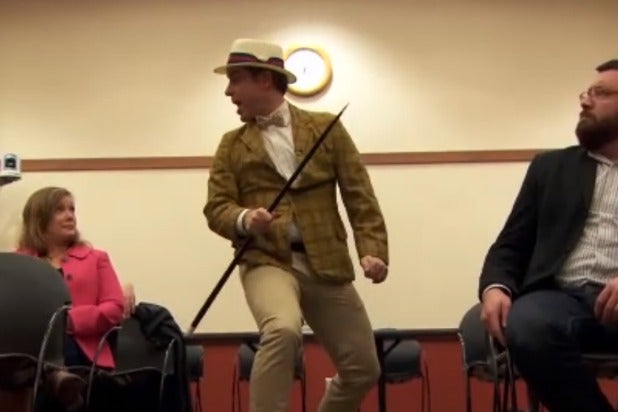 What happens when the Koch brothers’ Super PAC unleashes national election-style attack ads on a small town? “The Daily Show” told us Wednesday.

After a brief lead-in by host Jon Stewart, correspondent Jason Jones took us to Coralville, Iowa, a town of 20,000 where last year the Koch-backed Americans for Prosperity tried to influence the mayor’s race. Direct mail flyers accusing Mayor John Lundell of cheating on his property taxes flooded voters’ mailboxes.

“It’s like getting endorsed by Charles Manson,” he told Jones. Turner tied for last place.

The Koch brothers, conservative billionaires who have previously focused on state and national races, are now looking for local-level victories, Jones explained.

The story was told previously — though less comedically — by The New York Times. The paper interviewed the head of Americans for Prosperity’s Iowa chapter, who said he, not the Koch brothers, decided to focus on the Coralville race. The group does not promote specific candidates.

Jones spoke to conservative author Matthew Vadim about what it takes to woo small-town voters, and Vadim said a little show business might help. So Jones broke out his hat and cane for a “Music Man” tribute during a Coralville City Council meeting.