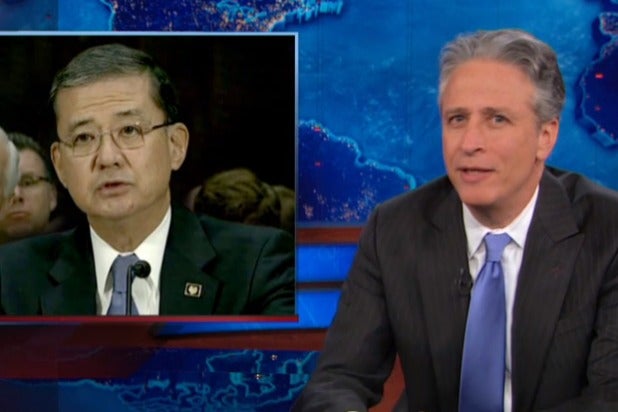 Jon Stewart says it may be time to declare war on veterans, since we seem to be better at waging wars than we are at caring for the men and women who fight them.

Stewart responded on Monday’s “Daily Show” to reports that Veterans Affairs officials in several states seem to have falsified records to make it appear that veterans had shorter wait times than they actually did.

The allegations spring from a Phoenix VA facility accused of widespread falsification. A VA employee in Cheyenne, Wyoming has been placed on administrative leave after CBS News reported he wrote a memo telling fellow employees how to falsify records to “get off the bad boys’ list” of hospitals with excessive wait times.

But Stewart says no one — from Shinseki to President Obama — seems angry enough about the mistreatment of veterans. Instead we get endless platitudes from politicians about how much they love the troops.

“It’s clear love and respect ain’t getting the job done,” Stewart said. “If we really want to improve the lives of these veterans, I’m afraid we have to declare war on them.”

We’re better at war, after all, than we are at dealing with its fallout, Stewart said. He proposed a new operation called “Operation Enduring Wait List: A War on Error.”